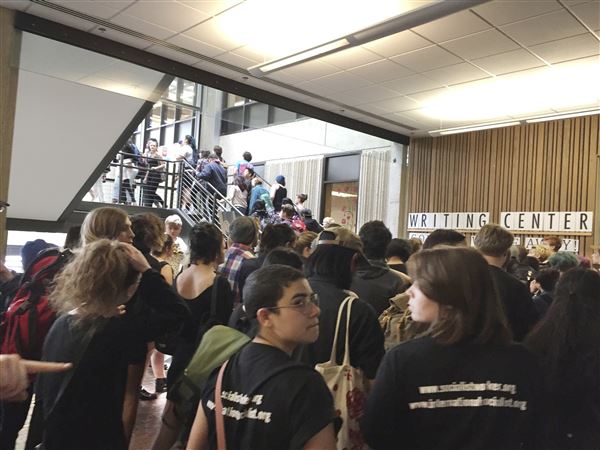 A memo emailed Friday from an Evergreen State College administrator to students warned them that aggressively cornering and shouting down faculty, staff and peers and blocking campus exits is actually illegal and future occurrences could result in criminal charges.

The written warning came some two months after a large cadre of campus activists stormed the halls of the progressive Washington campus in May, aggressively accusing several campus leaders of racism and apathy and demanding concessions for the alleged oppression they’ve faced.

The memo, written by Vice President for Student Affairs Wendy Endress, comes as Evergreen’s President George Bridges acknowledges the school has seen a drop in enrollment and the public institution faces pressure from state lawmakers to clean up its act.

The July 14 memo cites two specific incidents it described as the “greatest concern”:

On May 23 a sizable group approached the classroom where faculty member Bret Weinstein was leading his academic program, Hacking Human Nature. The group interrupted the program and others held in the same building, shouted for Weinstein to resign, and blocked Evergreen law enforcement officers who were responding to a call about the situation.

On May 24 some Evergreen employees working in the Library felt trapped in the building due to protestors blocking exits and office doors; some employees reported being stopped in the parking lot and on the roadway, questioned, and detained in their vehicles; and more than one individual reported being followed and their freedom of movement hindered.

The memo does not mention the bat-wielding student vigilante brigade that emerged during the uproar, or the boisterous meeting between students and administrators during which they berated President Bridges.

But it does use somewhat serious tones in describing the two incidents as “criminal” and going on to note that “in the future, individuals could be charged with crimes including obstructing law enforcement, disorderly conduct, criminal mischief, and/or unlawful imprisonment. Preventing a law enforcement officer from responding could place community members at great risk. Blocking egress doors is a violation of fire codes. This action endangered everyone in the Library.”