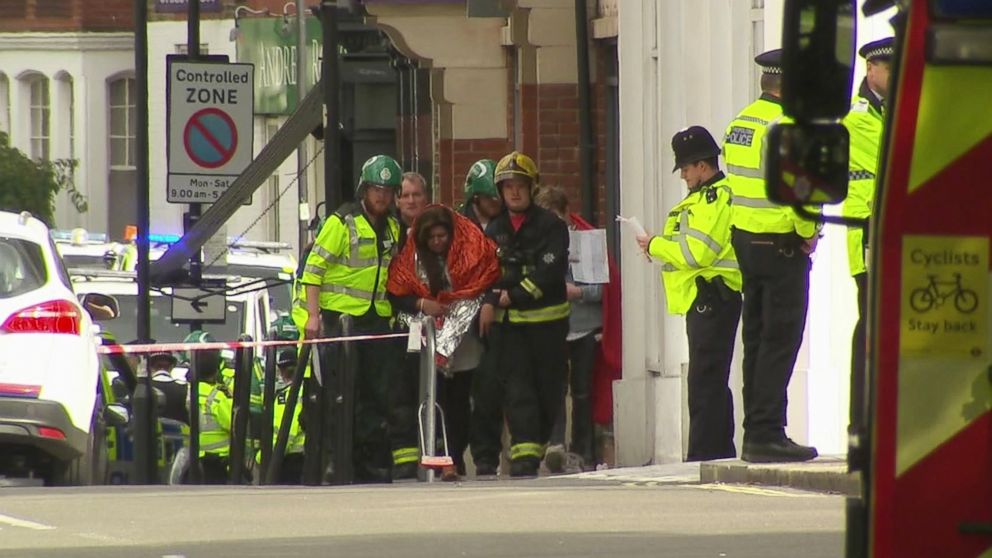 At least 18 people were taken to the hospital Friday after an explosion at a subway station in southwest London.

The blast took place 8:20 a.m. local time in the middle of rush hour at the Parsons Green station, BBC reports. Pictures show a white bucket on fire inside a supermarket bag. The Metropolitan Police could not confirm the cause of the fire but the incident is treated as an act of terror.

“My thoughts are with those injured at Parsons Green and emergency services who are responding bravely to this terrorist incident,” Prime Minister Theresa May said in a tweet.

PM: My thoughts are with those injured at Parsons Green and emergency services who are responding bravely to this terrorist incident.

London Mayor Sadiq Khan said the city “will never be intimidated or defeated by terrorism” in a brief statement on his Facebook page.

The city has been struck with two major attacks this year. Five people were killed after Khalid Masood, 52, drove a car into pedestrians March 22 on Westminster Bridge. He subsequently stabbed an officer as he attempted to enter the parliament building. A similar attack took place June 3 after three men rammed down pedestrians on London Bridge and went on a stabbing rampage in the area. Ten victims were killed and dozens were injured.

More than one person per day on average is arrested for a terror-related offense in the United Kingdom, according to government figures released Thursday.

There were 379 terror-related arrests during a 12-month period ending in June. The figure marks a 68 percent increase from the year before and is the highest since the government started collecting data in 2001. More than 90 percent of all offenses are related to Islamic fundamentalism.