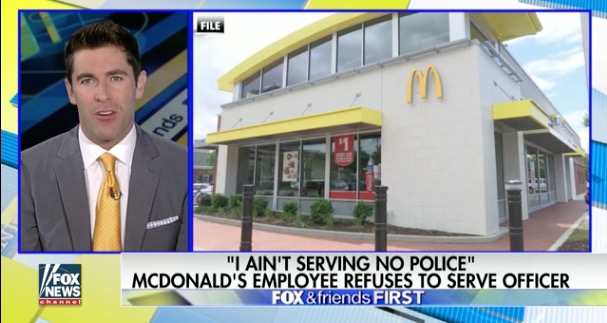 A McDonald’s worker in Henrico County, Virginia, who refused to serve an on-duty police officer is in hot water after the officer’s wife shared details of the incident on Facebook.

Virginia Department of Game and Inland Fisheries officer Scott Naff, a 25-year veteran of the force, stopped by the Henrico McDonald’s July 13 for a quick dinner during his shift, ordering in the drive-thru lane and paying for his food at the first window.

According to Naff’s wife, Cathy, when her husband pulled up to the second window to pick up his food, he was abruptly told by an employee, “I ain’t serving no police.”

“The young man who was working that window looked at him and backed away from the window mouthing something to my husband. My husband couldn’t hear him since the window was closed,” Naff wrote on Facebook. “The guy finally walked to the window and slid it open. My husband told him that he couldn’t hear him and the guy said ‘I ain’t serving no police’ and closed the window. The guy proceeded to tell everyone in McDonald’s, including the manager, that he was not going to serve the police.”

Cathy said her husband finally did receive his food from a different employee, without an apology or explanation.

The McDonald’s franchise owner, Freda Thornton, said in a statement Tuesday that appropriate actions were taken, but wouldn’t specify further.

“We regret this situation as it goes against our standards of providing a welcoming experience to everyone, and we have taken the appropriate action to resolve this situation,” Thornton said, according to the Richmond Times-Dispatch.

Naff’s wife, however, updated her Facebook post to report that her husband was told by the restaurant that the employee had been fired.

“The bottom line is that we shouldn’t treat anyone … uniform or not in the manner this McDonald’s has been treating people. Every person should be treated with respect!” she wrote.