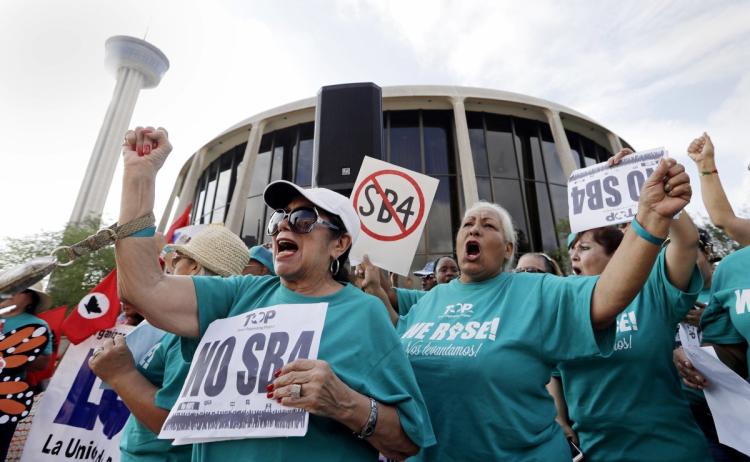 A federal judge temporarily blocked most of Texas’s new “sanctuary cities” law that allows police to ask about an individual’s immigration status during routing interactions with the public.

The ruling by U.S. District Judge Orlando Garcia will halt the law from going into effect Sept. 1 allowing a suit against it to go forward.

An aspect of the law permitting police officers to ask about immigration status was not blocked, but the ruling did limit the actions officers would be allowed to take after learning that a person was undocumented – officers could only report the person’s immigration status to federal authorities. (Fox News)

He also said in his 94-page ruling that the law would ultimately make the state less safe.

There “is overwhelming evidence by local officials, including local law enforcement, that SB 4 will erode public trust and make many communities and neighborhoods less safe” he argued, and that “localities will suffer adverse economic consequences which, in turn, will harm the state of Texas.”

“The Court cannot and does not second guess the Legislature,” he continued. “However, the state may not exercise its authority in a manner that violates the United States Constitution.”

“This ruling is good for Austin because SB 4 if ever implemented would make Austin less safe,” Mayor Steve Adler said in a news release. “This week’s crisis with Hurricane Harvey is just the most recent example why people need to feel safe approaching our local police and support groups, no matter what. If people in Austin do not feel safe asking for help, they become more vulnerable to crime, not just natural disasters.”

While the left was quick to celebrate the judge’s decision, the legal fight on SB4 is far from over, with Texas already vowing to appeal the ruling.

“U.S. Supreme Court precedent for laws similar to Texas’ law are firmly on our side,” Gov. Greg Abbott said in a statement. “This decision will be appealed immediately and I am confident Texas’ law will be found constitutional and ultimately be upheld.”