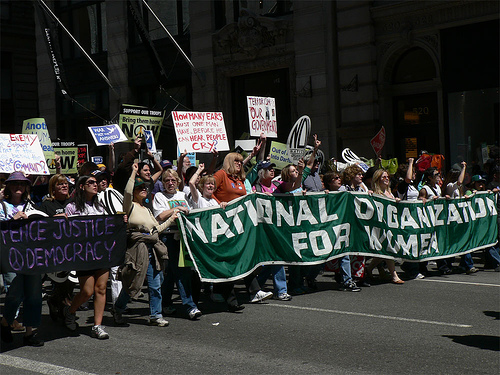 Tensions are rising among members of the National Organization for Women (NOW) after its leaders endorsed the March For Black Women to be held on Yom Kippur, one of the holiest Jewish holidays.

Following the statement by the feminist group, “Black Women’s Blueprint” (BWB), that the march will occur on Sept. 30, members of NOW — which is listed as a partner supporting the event — are accusing one another of racism, white supremacy, and anti-Semitism acco rding to Buzzfeed News. “As feminists we support the march because white supremacy pushes us all downward,” said NOW President Toni Van Peltalso in a formal endorsement of the march.

Jewish feminists who are members of NOW, however, feel that the march is an affront to their own tradition. “NOW has ringingly endorsed the Black Women’s March being held on Yom Kippur. I will no longer belong to NOW after having spent more than 40 years as an activist for NOW. DISTRESSED. NEVER AGAIN,” wrote Marilyn Fitterman, a long time member who quit the organization after its endorsement of the march, in a Facebook post.

Others didn’t agree with the sentiments Fitterman expressed. She is “using her religion as a reason to dehumanize women of color who are simply marching,” NOW member Desiree Jordan told Buzzfeed, vehemently disagreeing with Fitterman’s condemnation of the march. “NOW had nothing to do with the date choice. Jews are only 10% of the USA population. The planners have apologized for overlooking the Jewish holiday, but will March for Black Women,” NOW board member Jocelyn Morris said in a statement to BuzzFeed News on Saturday.

Jews account for approximately 2.2 percent of the U.S. adult population, according to estimates by the Pew Research Center.

“The members we lose over this we will replace with the ones we recruit at the March,” said Morris. NOW’s president also told members to “carry on” despite receiving emails from disgruntled and thoroughly upset Jewish NOW members asking the group to switch the march out of respect for the Jewish celebration.

“The organizers of the March for Racial Justice did not realize that September 30 was Yom Kippur when we were factoring in these and other considerations and applying for permits,” a March for Black Women affiliate said in an August statement. “Choosing this date, we now know, was a grave and hurtful oversight on our part.