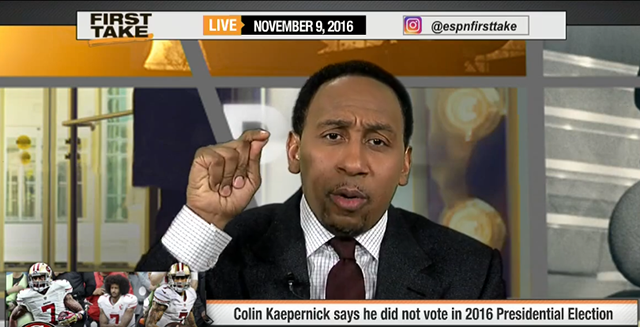 Social justice warrior and political hero of the left, Colin Kaepernick has never even registered to vote.

Kaepernick began his protest of the national anthem and the American flag in August of 2016 while he played for the San Francisco 49ers.

He made headlines when he decided to sit for the national anthem during a preseason game. Since then the number of athletes protesting has also grown.

Backlash from angry fans reached a fever pitch this week after President Trump lashed out at NFL players protesting. It has turned into an all out war with fans burning NFL gear and bombarding their network providers with phone calls cancelling football packages.

Today, Kaepernick is an unemployed whiner and it turns out that he has never even registered to vote.

Kaepernick, who was raised in Turlock, turned 18 in 2005, but he has not registered to vote in California at any point in the last decade, according to records maintained by the California Secretary of State. He also did not register in Nevada while he attended the University of Nevada, Reno, from 2006 to 2010, according to the Washoe County Registrar of Voters.

Kaepernick revealed to reporters in mid-November of 2016 that he didn’t vote in the 2016 presidential election because it would be hypocritical of him since the whole system is oppressive:

“I said from the beginning I was against oppression, I was against the system of oppression,” Kaepernick said. “I’m not going to show support for that system. And to me, the oppressor isn’t going to allow you to vote your way out of your oppression.”