The US is currently the world’s largest steel importer. 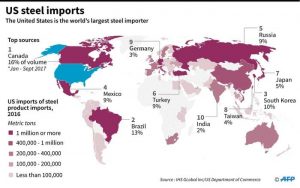 But this was not the first time President Trump talked about taxing foreign products.

In 2011 Donald Trump went on a profanity-laced speech in Las Vegas where he promised to tax China imports by 25% if they continued to manipulate their currency.

Mother Jones posted on the full exchange.
In a Thursday night speech in Las Vegas, Trump railed against lawmakers that he described as “blood suckers,” bouncing from subjects like