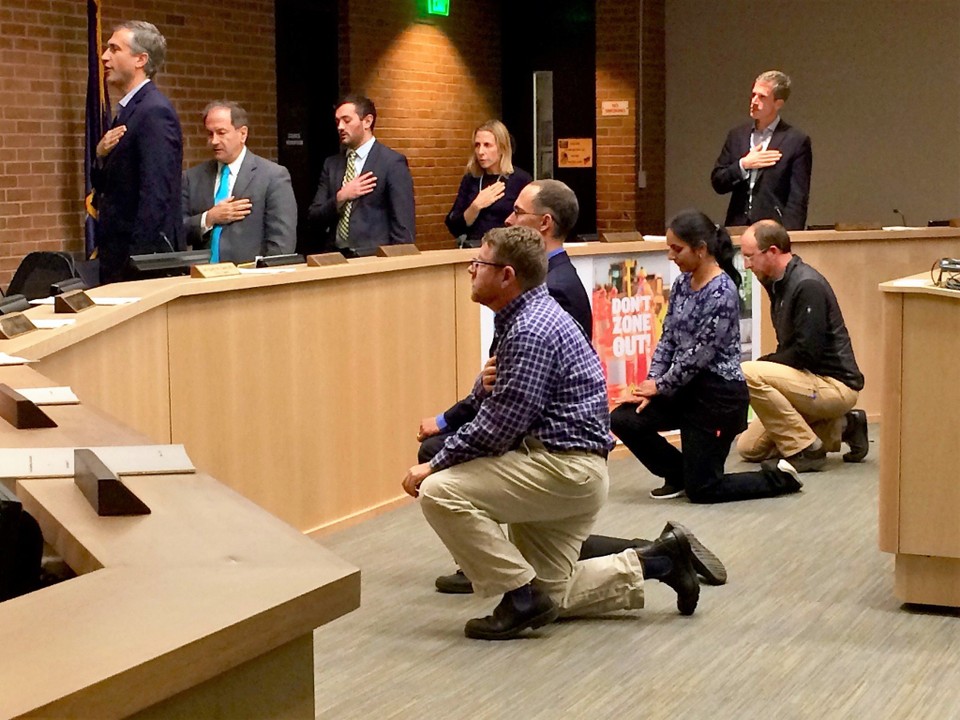 Four city council members in Ann Arbor, Michigan knelt for the Pledge of Allegiance after their meeting was called to order on Monday night.

5th Ward councilmen Chip Smith and Chuck Warpehoski were joined by 1st Ward council members Sumi Kailasapathy and Jason Frenzel in taking a knee when it came time to recite the Pledge of Allegiance before the city council meeting, M Live reported.

Four #a2council members #TakeAKnee during the Pledge of Allegiance at tonight's meeting https://t.co/PIG4Uv6jHS

Warpehoski said his decision to kneel was an “act of attention, concern and respect.”

“I can’t speak to what is in each person’s heart, but for me to ‘take a knee’ is an act of attention, of concern, and of respect,” Warpehoski wrote on his website ahead of Monday’s meeting and also stated at the meeting. “And it is in that spirit that I take a knee at tonight’s City Council meeting: out of respect for the aspiration that we be a nation ‘with liberty and justice for all,’ with full attention that we fall short of that ideal in many ways, and with humble dedication to continue to work that the promise of the pledge may be fulfilled.”

Kailasapathy said during the meeting that she was kneeling for the pledge in order to demonstrate she was committed to upholding Democratic values.

“For me, taking a knee is also showing solidarity with the group of people who have been doing this at the national level,” she said.

The demonstrations reflect the NFL national anthem protests that began last year. Former San Francisco 49ers quarterback Colin Kaepernick began kneeling during the national anthem last season in order to draw attention to racial injustice. Some other players in the NFL followed suit, but it didn’t become a national phenomenon until late September of this year after President Donald Trump said NFL owners should not tolerate kneeling during the national anthem. He went on to say that if a player kneels, they should “get that son of a bitch off the field.”

Trump’s comments about kneeling drew criticism from players and led to over 200 players kneeling or not standing for the national anthem the following Sunday. Protests continued in the following weeks, as did backlash from many fans. NFL commissioner Roger Goodell responded on Oct. 10, saying “everyone should stand,” but the league later clarified he was not “demanding” everyone do so.