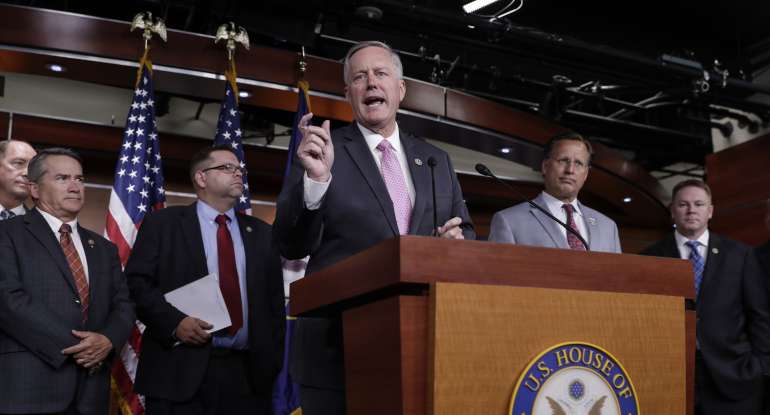 WASHINGTON – House Freedom Caucus Chairman Mark Meadows (R-N.C.) and other conservative members of the House of Representatives are calling on House Speaker Paul Ryan (R-Wis.) to delay the August recess so Republicans have a better chance of passing parts of President Trump’s agenda.

“We’re almost at the 200-day mark,” Meadows said during a “Conversations with Conservatives” event today on Capitol Hill. “It’s not a good story.”

Meadows said Republicans would not be able to pass a tax reform package if they wait to begin the legislative process in September.

“There’s zero chance that gets enacted into law before the end of the year. I think the tax cut needs to be retroactive so we get the economy moving right away,” he added.

Meadows said the White House has been “ready” for a comprehensive tax reform plan from Congress.

“They’re ready for a plan yesterday, all right,” he said. “We need to stay here in August or until we get a plan. We can leave in July if we go ahead and get healthcare done, the debt ceiling done and have a plan that we’re talking about on taxes. All of that could be done by the end of July, so let’s go ahead and get it done.”

“Let’s talk about deficit-neutral because when you really get there that’s what you are talking about. Let’s do a tax cut so hardworking taxpayers can keep more of their money. It’s not our money, it’s their money,” he said. “Let them keep it. Let’s go ahead and work on it and make sure it happens.”

Some Republican lawmakers such as Rep. Andy Biggs (R-Ariz.) have signaled support for a “straight repeal” vote if the Senate fails to pass an Obamacare replacement bill. He said Ryan should delay the House August recess to finish healthcare and work on appropriations bills.

“Everyone on the Republican side ran on repeal and this is a way to it,” Biggs said.

“We can be highly effective by staying another month,” he said. “They elected Donald Trump as a change agent and we were elected on that wave and we have every advantage to go in and make huge changes.”
Rep. Thomas Massie (R-Ky.) pointed out that many Republicans were re-elected after voting for a “full” repeal.

Rep. Matt Gaetz (R-Fla.) said there’s “no evidence” to suggest that there are not enough votes in the House for full repeal of Obamacare. He added that Republicans should not send mixed messages to their constituents on the repeal.

“We should call the bluffs of those who say, ‘well, when it wasn’t real I was willing to vote to repeal Obamacare, but now that we can actually get it done I find myself wringing my hands, wetting the bed and hiding under a table somewhere,’” he said.

Rep. Dave Brat (R-Va.) said House conservatives should remind their constituents that they tried to fully repeal Obamacare in this session of Congress.

“Leadership would not allow that on the House floor,” he said.

Rep. Ron Estes (R-Kan.) said many people are already losing their health insurance under Obamacare in his state.

“A repeal would actually help protect some of those people who haven’t had the choices so they could get the insurance they want,” he said.