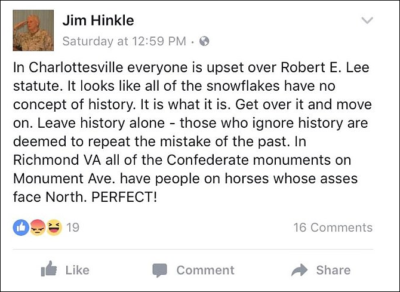 A Georgia judge and former mayor of Grayson, Ga. is suspended from his judiciary duties after he criticized the “snowflakes” who came out in force to oppose racists at Saturday’s deadly rally in Charlottesville, Virginia.

Gwinnett County Chief Magistrate Judge Kristina Hammer Blum told the Atlanta Journal Constitution she suspended magistrate judge Jim Hinkle over his comments on Facebook shortly before an alleged racist plowed a vehicle into a crowd of people at the “Unite the Right” rally Saturday. One person died and numerous others were injured.

“In Charlottesville everyone is upset over Robert E. Lee statute (sic). It looks like all of the snowflakes have no concept of history. It is what it is. Get over it and move on. Leave history alone – those who ignore history are deemed to repeat the mistake of the past. In Richmond VA all of the Confederate monuments on Monument Ave. have people on horses whose asses face North. PERFECT!” Hinkle posted.

Blum told the Journal Constitution she suspended Hinkle, a former U.S. Marine Crops veteran and long-serving mayor of Grayson, as she looks into the matter.

“After reviewing the Facebook posts you brought to my attention this morning, I have suspended Judge Hinkle effective immediately while I consider the appropriate final action,” Blum wrote in an email.

“As the Chief Magistrate Judge, I have made it clear to all of our Judges that the Judicial Canons, as well as our internal policies, require Judges to conduct themselves in a manner that promotes public confidence in the integrity, impartiality, and fairness of the judiciary. I consider any violation of those principles and policies to be a matter of utmost concern, and will certainly take any action necessary to enforce compliance and to maintain the integrity of this Court.”

Hinkle told the AJC he “didn’t see anything controversial” about his comments, but declined to discuss the matter in detail.

“But you know,” he said, “with the way things are going in the world today, I guess everything is controversial.”

Hinkle’s “snowflakes” post isn’t the first to get him in trouble.

The Hill notes that in a follow up post he compared the movement to remove Confederate statues to the destruction of historical sites by ISIS in the Middle East.

The next month, Hinkle allegedly wrote that “the U.S. Treasury has just announced the ugliest $20 bill, or any money ever,” on the same day the agency declared it would replace the portrait of Andrew Jackson with one of Harriet Tubman, the civil rights crusader.

In June 2016 he also posed the question: “This is a tenant of what peaceful religion? ‘Slay the unbelievers wherever you find them.’”

His account was switched to private or deleted on Tuesday.

“When history of oppression and bigotry is celebrated, future generations may accept such as societal norms,” Gwinnet County Democratic Party Chairman Gabe Okoye told the AJC. “Given his biased views on this Charlottesville matter, how can ethnic minorities and religions trust him to render fair and equitable justice from the bench?”

Gwinnett County Commission Chairwoman Charlotte Nash, meanwhile, said the judicial controversy is out of her jurisdiction.

“Since the individual involved is an employee within the Magistrate Court and the Board of Commissioners has no authority over those employees, this is a matter for that Court to handle,” Nash wrote in an email to the AJC. “I have confidence that the Chief Magistrate will review and address this situation.”