WASHINGTON — Republican Rep. Scott Taylor phoned the offices of the anti-illegal immigration nonprofit group NumbersUSA and threatened to “blow up” the group’s offices for criticizing his position on amnesty.

Sources familiar with House Speaker Paul Ryan’s whip operation tell Big League Politics that Taylor, the first-term congressman from Virginia’s Second District, is informally responsible for whipping votes to preserve President Obama’s DACA (Deferred Action for Childhood Arrivals) program. NumbersUSA criticized Taylor and encouraged its followers to call his office. The nonprofit group sent around a letter that Taylor signed alongside 33 other Republicans urging Speaker Ryan for “passing of a permanent legislative solution for Deferred Action for Childhood Arrivals (DACA) recipients before the end of the year.”

Then things got nasty.

A source close to NumbersUSA told Big League Politics that Rep. Scott Taylor called NumbersUSA’s office last Friday “screaming profanities at them” after the group disseminated the letter. The source claimed that NumbersUSA did “nothing else” to agitate Taylor, merely sent around the letter.

On Wednesday, Rep. Taylor called again “asking for their physical address and threatened to blow up their offices,” according to the source. Multiple sources close to NumbersUSA confirmed the statement on the phone call.

The feud between Taylor and NumbersUSA is evident based on Taylor’s Facebook page, where he posted about the group last Wednesday, the day of the first alleged phone call to the group’s offices.

“This bottom feeding Washington group, NumbersUSA, is being completely disingenuous with this BS Ad. This is a group that raises money off people’s fears. Never have I written or stated support for Obama’s amnesty. This group told me they believe kids/young adults in the program should be deported back to countries they do not know and were not raised in. They were told my position,” Taylor wrote on his Facebook page, showing an image of a NumbersUSA ad slamming Taylor. 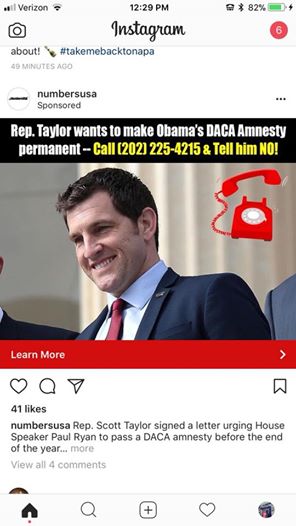 “Thirty-four Republicans in the House of Representatives signed a letter to House Speaker Paul Ryan calling for passage of a permanent DACA amnesty before the end of the year. Reps. Scott Taylor (R-Va.) and Dan Newhouse (R-Wash.) led the effort,” according to NumbersUSA’s website.

Americans For Legal Immigration included Taylor atop its “Kate’s List” of 34 Republican members of Congress who support amnesty. The list is named for Kate Steinle, who was killed by an illegal immigrant subsequently acquitted of murder.

An official at NumbersUSA declined to formally comment on the drama, saying that the group prefers to remain focused on the immigration issue.

Big League Politics reached out to Rep. Taylor and his staff for comment but our press inquiries were not returned.