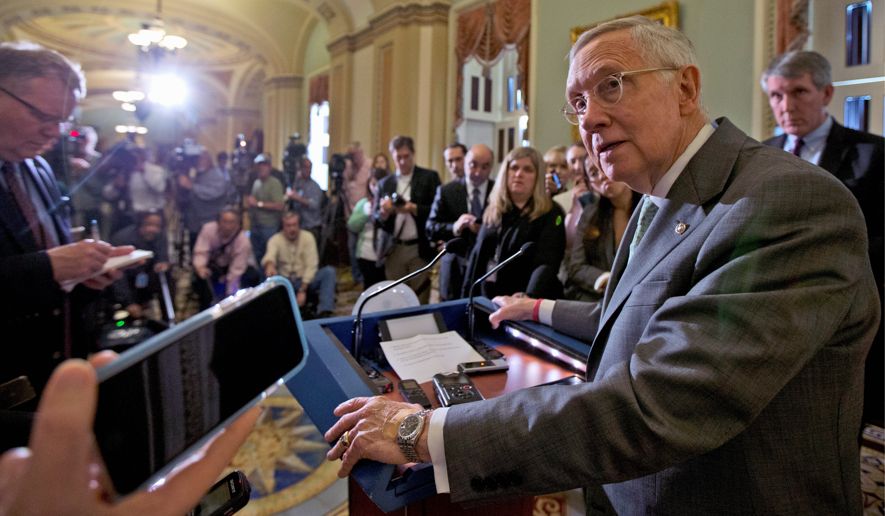 Alarmed by the stalemate on healthcare reform, lack of progress on tax reform and appropriations bills that are far behind schedule, Republican lawmakers across Congress are increasingly willing to consider canceling the month-long August recess.

Senate Republican negotiators reported that they are not close to a deal on healthcare reform and that scheduling a vote by July 4, which Senate Majority Leader Mitch McConnell (R-Ky.) has pushed, is likely unrealistic.

That impasse has held up work on a budget resolution, which is necessary to move tax reform and the annual appropriations bills.

Lawmakers calculate there are only 45 legislative days until the end of the fiscal year, on Sept. 30.

With the party still sharply divided on healthcare and tax reform, it looks increasingly possible that Republican lawmakers will leave town in July for a monthlong break without any major accomplishments under their belts.

“I think there’s a majority that probably supports being here,” said Sen. David Perdue (R-Ga.), referring to the possibility of canceling or cutting short the August recess.

He said GOP lawmakers need to make progress on the budget and spending bills to avoid a government shutdown scenario in September, as well as progressing on tax reform.

Perdue said colleagues are also “facing the reality if we don’t we get some kind of tax package on the books this year” the country could find itself in a recession.

He said CEOs are feeling better “that government is going to get off their backs” and the “economy wants to turn” but are relying on a reform of the tax code in the next six to seven months.

Sen. Dan Sullivan (R-Alaska) has pushed Senate Republican leaders for the past two weeks to cancel the August recess.

“I think absolutely we should truncate or cancel recess. We have a huge agenda. I think we can get a lot of it done, but what we don’t have is time,” said Sullivan. “We can make more time.”

The idea is gaining steam with colleagues elected to the Senate more recently.

A Senate GOP aide expressed doubt, however, that Perdue, Sullivan and Daines will get very far in convincing McConnell to cancel the recess.

“Are they going to get all 52 Senate Republicans to do this?” the aide asked. “Perdue and Sullivan talking is fine, but every time members say they need to stay and work over a recess there’s usually a [congressional delegation] trip somewhere” that their colleagues have planned.

Perdue acknowledged there are probably a solid 15 Republican colleagues who would be strongly opposed to canceling the August recess.

But a sense of growing panic about the dwindling legislative calendar is starting to take hold in the Republican conferences in both the Senate and House.

Senior administration officials are warming up to the idea of keeping Congress in town longer this summer.

White House Office of Management and Budget Director Mick Mulvaney told reporters Thursday that he supports Congress staying in session through at least part of August.

In the same briefing he noted that the White House has not yet figured out a strategy for raising the federal debt limit, another big item sitting on the agenda.

Members of the conservative House Freedom Caucus have been most vocal in calling for the cancelation of the August recess.

The group issued a statement on June 6 calling on Speaker Paul Ryan (R-Wis.) to keep the chamber working through Labor Day to “accomplish the priorities of the American people.”

While positions taken by the conservative caucus often fall flat with Republican colleagues, the idea is gaining traction with mainstream members who are concerned by the prospect of going home empty-handed after President Trump’s first six months in office.

Rep. Tom Cole (R-Okla.), a member of the House Appropriations Committee, said there is support for staying through the summer to ensure that appropriations bills are marked up.

“Non-appropriators seem to think these things can be done instantly, that we just dream up numbers, pull them out of a hat. And so it may well necessitate us being here some time in August,” Cole said.

“I think it’s really important that people understand that Congress is working. We are producing a lot of legislation,” he added.

The chances of staying into August would increase, he predicted, if the Senate passes a healthcare reform bill, which need to be reconciled with the House-passed American Health Care Act.

Chip Saltsman, a Republican strategist, said the worst thing Republicans could do would be to go back to their home states for a monthlong recess if they fail to pass the ObamaCare repeal.

“If you’re going back and you’re meeting with constituents, what can you point to and say, ‘This is what we’ve done after the first six months of controlling the entire apparatus of the federal government’?” he said.

Republicans scored a big win by confirming conservative Justice Neil Gorsuch to the Supreme Court. They’ve also rolled back 14 regulations from the Obama administration through the Congressional Review Act, but they haven’t made much progress on big-ticket bills.

“What’s been signed by the president? They have done some good things but as far as the big things the election was on — they haven’t finished ObamaCare, I don’t see a balanced budget anywhere, I don’t see an aggressive infrastructure package, I don’t see tax reform,” Saltsman added.

In terms of the annual must-pass spending bills, lawmakers are further behind schedule than at a similar point in any other year in recent memory.

Appropriators say the delay was due to finishing work on the appropriations bills for fiscal year 2017, which carried over until late April, and the fact that Trump submitted his budget proposal to Congress unusually late.

Former Rep. Jim Walsh (R-N.Y.), who served 20 years in the House, including 16 years on the House Appropriations Committee, said he doesn’t ever remember the appropriations process being so far behind schedule as it is this year.

“They are very far behind because they had to work through last year’s bills this year and a new administration coming and no budget request from the White House until very late,” he said. “I don’t know that the committee has ever started later than this year in my memory.”

But he also acknowledged that he could not recall a year where leaders canceled or significantly cut the August recess.

Some Republicans say that even if they chopped the August recess in half, it might not help them make any more progress in passing healthcare, tax reform or the spending bills.

“I’m a firm believer that the amount of work you have expands to fit the amount of time you give to it,” said Sen. Bill Cassidy (R-La.), who is deeply involved in the Senate’s healthcare negotiations. “Deadlines sharpen a man’s mind.”