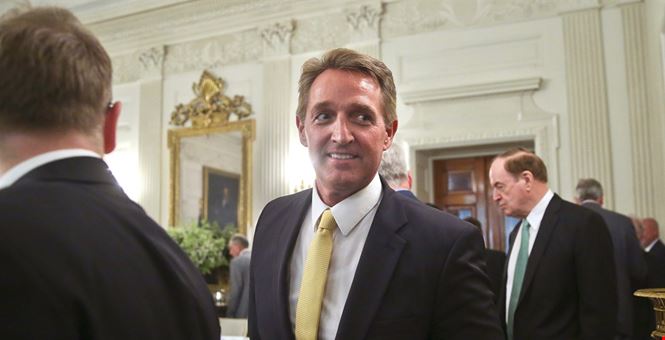 In Sen. Jeff Flake’s (R-AZ) book Conscience of a Conservative: A Rejection of Destructive Politics and a Return to Principle, he surreptitiously blames President Trump for the Republican Party’s rejection of its former principles. He chalked up Trump’s rhetoric and behavior to leaving the GOP in a much “coarser” place. In interviews, the senator has said that Republicans shouldn’t be afraid to stand up and condemn Trump’s Twitter timeline.

Trump had his chance to hit back at Flake at a rally in Arizona last month, not mentioning Flake by name, but mocking a Republican was was “weak on borders, weak on crime.” The audience knew exactly who he meant.

The hostility seemed to be all temporarily forgotten Wednesday night when Trump reportedly came to a compromise with top Democrats over the Deferred Action for Childhood Arrivals program. The White House recently announced that the controversial program, which prevents the immediate deportation of illegal immigrants who came to the U.S. as minors, would be rescinded over the next six months. After initially speaking with House Minority Leader Nancy Pelosi, Trump softened his tone. Then, on Wednesday, we had reports that he, Pelosi and Senate Minority Leader Chuck Schumer agreed at dinner to protect DACA recipients and exclude the border wall. Flake tweeted his congratulations to the president for protecting the program’s recipients.

Kudos to @POTUS for pursuing agreement that will protect #Dreamers from deportation https://t.co/2nRYOv82RO

Other Republicans are not so sure this was a good deal. Rep. Peter King (R-IA) predicted that if the report is true and Trump struck a deal with the Dems, then his base of support is “blown up” and “beyond repair.”

Trump’s supporters are certainly beyond frustrated. After all, their guy campaigned on “the wall” since announcing his campaign back in the summer of 2015.

Exactly what @realDonaldTrump campaigned on. Not. https://t.co/aiHqiI8ein

Hope may not all be lost. White House Press Secretary Sarah Huckabee Sanders was quick to note Wednesday night after the kerfuffle that Trump and his dinner guests did not agree to take the border wall off the table. Then, POTUS said the same.

No deal was made last night on DACA. Massive border security would have to be agreed to in exchange for consent. Would be subject to vote.

The wall, he wrote, is already under construction.