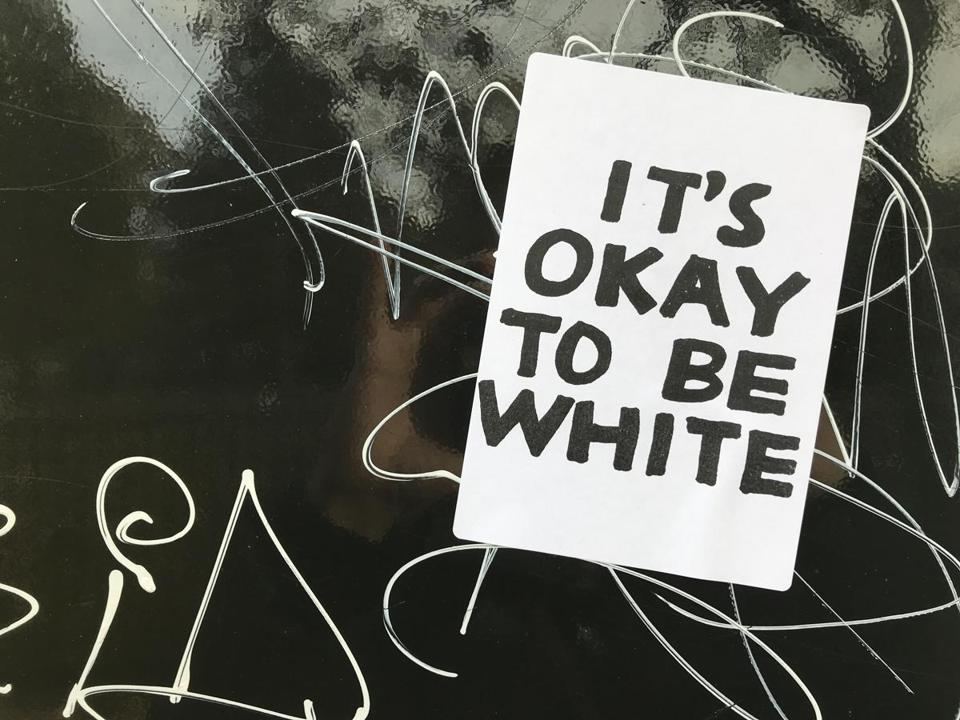 Harvard Law School Dean of Students Marcia L. Sells has condemned the posting of “It’s okay to be white” stickers on the university campus, calling them divisive and “a provocation.”

According to reports, at least 20 handmade stickers bearing the message “It’s okay to be white” were posted on light poles and electrical boxes around Cambridge Common and Harvard Square as well as at Harvard’s Wasserstein and Hastings Halls last week, provoking consternation from university officials.

In an email message, Dean Sells said that the content of the stickers was “intended to divide us from one another.”

“HLS [Harvard Law School] will not let that happen here. We live, work, teach, and learn together in a community that is stronger, better, and deeper because of our diversity and because we encourage open, respectful, and constructive discourse.”

On receiving reports about the stickers, Cambridge Police instructed the Department of Public Works to remove them and public works employees were seen diligently removing the offending stickers by scraping them off with a putty knife. Most of the stickers were apparently removed within hours after they were discovered.

As would be expected, social media revealed mixed reactions to the stickers, ranging from condemnation to support.

whomst the fuck is putting “its okay to be white” signs all over campus?

first of all, it’s not

It is ok to be white. It's ok to be non-white. It's not ok to murder, terrorize and vandal…no matter what color u are. #oktobewhite https://t.co/SoSdXtYjio

Nobody said it was…it is just okay to be white, as it is okay to be black, Asian, Latino. Anyone offended by this is racist. #OkToBeWhite

why is this causing mass hysteria? Why so offended? #OKToBeWhite pic.twitter.com/1K8SQi0wjV

Some have suggested that the sign-posting came in response to a campaign started by the website 4chan, calling on followers to put up posters with the message in their area on Halloween night.

“Okay to be White” stickers were in fact discovered in a number of places around the country as well as in Canada, sparking reactions wherever they were posted.

According to a report on WUSA9 TV, the “It’s okay to be white” signs represent “a concentrated effort to foment racial and political tension.” The station said that the story out of Montgomery County MD was “disturbing.”

Media Matters, a left-wing watchdog group funded by George Soros’ Open Society foundations, also jumped in the fray, attacking Fox News host Tucker Carlson for suggesting that the hysteria over the “OK to be white” postings was wrong-headed.

For its part, the Washington Post said that posting “It’s okay to be white” signs represented an attempt to “spark racial division.” The same newspaper has routinely defended the Black Lives Matter movement as a legitimate fight against racism.