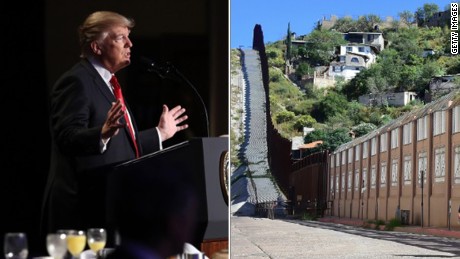 The House voted Thursday to fund a portion of President Trump’s border wall to the tune of $1.6 billion as part of a national security-themed spending package.

The measure was approved largely along party lines by a vote of 235-192. Five Democrats voted yes, while five Republicans voted no.

The bill includes spending bills for defense and veterans programs, legislative branch operations and the Department of Energy.

The inclusion of funding for a U.S.-Mexico border wall, which fully meets Trump’s budget request, makes it likely that Senate Democrats will block the spending package when it moves to the upper chamber.

But House passage serves as an opening salvo in the debate to avoid a government shutdown this fall, which will start in earnest when lawmakers return from the summer recess.

Government funding will run out on Oct. 1 absent an agreement. […]

House GOP leaders used a procedural maneuver to unilaterally add the $1.6 billion for the wall to the spending package without a standalone up-or-down vote on it. That move prevented what could have been a tough vote on the wall proposal for some GOP lawmakers. (The Hill)

One of President Trump’s central campaign promises was to build a wall along the U.S.-Mexico border. While this legislation would fund only a portion of Trump’s proposal, it’s a start.

The $1.6 billion would go toward the construction of 32 miles of new fencing and 28 miles of new levee wall in the Rio Grande Valley, and 14 miles of secondary fencing in San Diego, California.

“This legislation funds the most critical functions of government. It secures our borders by providing funding for a wall on our southern border,” House Speaker Paul Ryan said in a statement. “It gives our service members a raise and ensures they have the tools they need to complete their missions. Additionally, the legislation takes care of our veterans here at home who have kept us safe.”