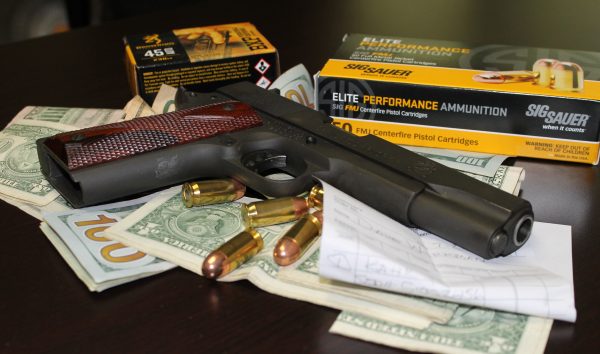 Seattle’s gun tax is a failure. Not only has it basically done nothing to curb gun violence, but it actually lost the city money. Most people with a fully-functional brain would look at this information and decide that maybe, just maybe, they should repeal the idiotic tax.

But not Seattle’s politicians. Instead, they just double down on the stupid.

Jon Grant, who is running against Teresa Mosqueda for the seat being vacated Tim Burgess, says Seattle is being hit hard by gun violence and the gun industry needs to be held accountable.

Grant says doubling the tax to $50 a gun and 10 cents per round of ammunition would beef up the research funding and ensure the gun industry shoulder’s some of the costs of gun violence.

Grant is vying for the seat previously held by someone who pushed through the tax in the first place, so this will probably help. Frankly, that’s a sad commentary on Seattle voter’s gullibility among other things. Further, if Grant wins and proposes this, there’s no reason to believe it doesn’t stand a good chance of actually passing.

However, there’s so many ways this is a big fat fail. To start with, the gun industry is not responsible for the gun violence. Despite liberal politicians continually claiming otherwise, they simply create and provide a product for law-abiding citizens to enjoy. They’re not responsible for people who misuse their merchandise.

After all, there’s no move to punish the automobile industry for people being killed by the misuse of cars and trucks.

Second, Grant and those of a similar mind forget that they’re just one city. An increase in such taxes will only send people outside of town to buy guns and ammo. While it might be a pain, a $50 difference in the cost of a gun could easily cover that difficulty.

While a 50-cent increase in ammo might not run off people just looking to pick up a box of ammo, those who shoot a lot will be far more likely to also venture outside the city to buy their rounds. In other words, they’ll do a wonderful job of boosting the business of gun stores outside the city’s jurisdiction.

Meanwhile, the criminals who can’t legally purchase firearms anyway will continue buying and selling guns without the tax. They’ll keep their guns and get more, then keep doing what they’re doing. None of this will accomplish a thing.

Of course, you know how you can tell these politicians don’t really care about gun violence?

Because they only do things that will punish lawful gun owners. They do nothing about cracking down on actual crime, nor do they ever seem interested in ferreting out the root causes of crime so that can be combatted. No, they only focus on the law-abiding.

It doesn’t really even matter why they focus on those who purchase guns lawfully. It’s simply sufficient to know that they do, and that it is incumbent upon all of us to oppose this brand of idiocy.