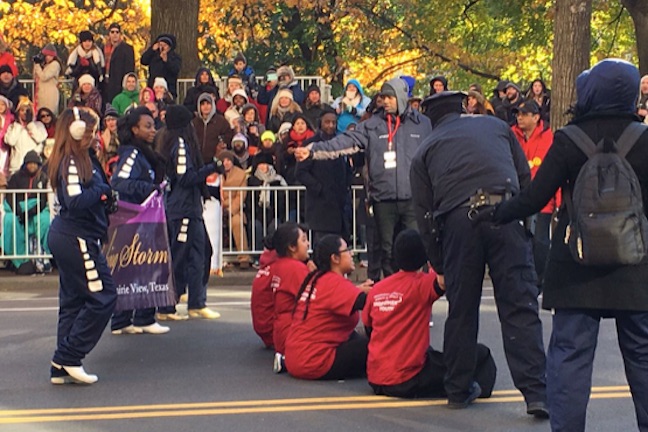 Can’t leftists take one day off from being complete assholes? Seriously, it’s Thanksgiving. A small group of illegal aliens attempted to disrupt the Macy’s Thanksgiving Day Parade in New York City and yes, this was an anti-Trump/pro-amnesty demonstration. Nothing makes people sympathetic to a cause like attempting to sabotage a beloved holiday tradition, does it?

Four whole people? That sounds more like a Moms Demand Action protest than an anti-Trump rally.

The protesters are young people who came into the country undocumented…

That’s the liberal media way of saying the protesters are illegal aliens.

The protesters, dressed in red T-shirts, sat down in the middle of the road on Central Park West at 70th St. and were soon ushered off by police. They were not arrested…

Yeah, it would have been a shame if illegal aliens were arrested for breaking even more laws, wouldn’t it? Also, the irony is not lost on me that lawbreakers were trying to call attention to their lawlessness by breaking the law.

The reason stated for this massive show of civil disobedience is because these illegal aliens are so-called DREAMers who were given temporary deportation relief by former president Obama. Earlier this year President Trump stopped the Deferred Action for Childhood Arrivals (DACA) program, which shielded hundreds of thousands of illegal aliens from getting the boot.

As alluded to by that last guy, these protesters don’t just want protection for DACA recipients, they want amnesty for every single illegal alien in this country:

“It was scary at the beginning. I was scared of being arrested, I was scared of losing my job. But once there, I felt empowered, having them with me, and knowing it wasn’t just for me — it was for everyone, not just the Dreamers, but all 11 million,” said Barbara Hernandez who is an illegal alien teacher from California.

“What we’re trying to remind people is that they’re the ones who shape a Democracy, and it’s their voices that shape what the future is,” said yoga instructor Hector Martinez.

Well no, actually, illegal aliens don’t have a say in shaping our democracy. We are a nation of laws and they are breaking several of them. They definitely don’t get to change our laws to accommodate their complete lack of respect for those laws. To be honest, I’m a little leery about letting people who teach yoga for a living have a say in our democracy.

The participants of this 4-person protest think it was such a roaring success that they plan on taking it on the road:

“Today was successful in that we were able to remind the immigrant community that they don’t have to live in fear,” said Martinez.

They got 4 people to show up to an anti-Trump protest in the biggest most liberal city in the country. If that’s a success, what do they think failure looks like? Did anyone even notice them?