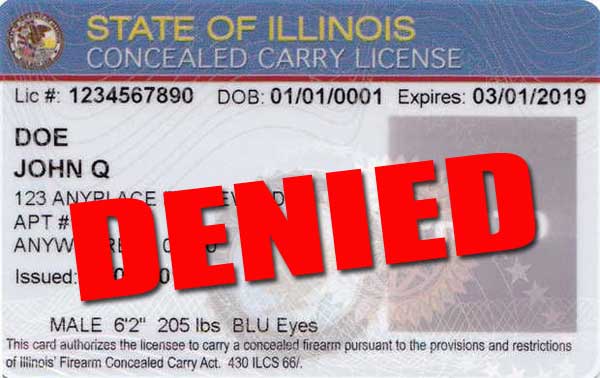 Applications for concealed-carry permits have steadily decreased since Illinois launched its program in 2014, and several folks are offering their take on what’s driving the decline.

From The State Journal-Register:

State police said in some instances, people applied for permits one year, and weren’t issued the permit until the following year. That’s why more permits have been issued than applied for this year.

In total, Illinois now has about 253,000 people authorized to carry concealed firearms, and Illinois Rifle Association Executive Director Richard Pearson told the Illinois News Network that despite the drop, he expects that figure to hit 300,000 soon.

Pearson believes the declining interest in the program is tied to the high fees charged by the state.

“By the time you get your permit, get your firearm and get your training you’re probably in the $800 to $900 range, at the very low end of it,” Pearson said, adding that the total package can range up to $2,000 for some firearms.

He also pointed to the labyrinth of public and private gun-free zones throughout Illinois that discourage some from pursuing a concealed carry permit. Pearson said the zones are magnets for criminal activity.

“Given the number of places that prohibit concealed-carry in their establishment, it makes it pretty difficult for concealed-carry people to go about their business,” Lough told the Journal-Register.

Lough also offered his other factors that could be affecting the slumping permit numbers.

“If you look at American society, most of the guns in this country are owned by a relatively small percentage of the population,” he said. “I think that population was probably very excited about being able to conceal-carry, and I think a lot of those people got the permits fairly quickly, but the fact is, you reach a saturation point where most of the people who want to concealed-carry have the permits.”

Lough mixed in a little bit of liberal politics, as well.

“The NRA and the gun manufacturers were pretty effective during the (President Barack) Obama years of jimmying up fear among the population that new restrictions on gun ownership and Second Amendment rights might be just around the corner any moment,” Lough opined. “Now, you have a president and Congress dominated by individuals who are primarily pro-Second Amendment and anti-gun control. It’s hard to maintain the level of fear necessary to constantly be reinforcing gun sales.”

Regardless of the reason, Pearson pointed out that there hasn’t been any serious issues since the state approved the concealed carry program.

“All the dire predictions of what was going to happen with concealed-carry haven’t come true,” he said, adding that the program is making the state safer in more ways than one.

“You’re probably looking at a million people in Illinois who got their firearm safety education because a friend or a family member went to the class,” Pearson said. “That really helps spread gun safety throughout the state.”

Meanwhile in Chicago, home of some of the nation’s strictest gun control laws, the 2017 murder death toll currently stands at 448 – nearly all in shootings – with more than four months to go, DNAinfo reports.