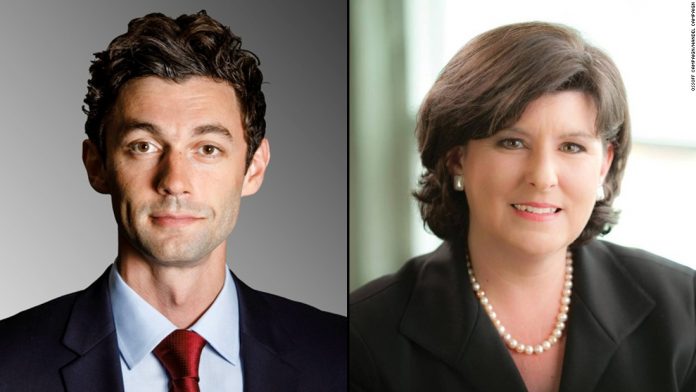 But he may be on the verge of doing just that.

Ossoff, a political newcomer who launched his congressional campaign in the Republican-leaning northern suburbs of Atlanta by urging supporters to “make Trump furious,” now speaks in the measured tones of a moderate consensus builder and rarely mentions the president by name.

Local economic development and cutting wasteful government spending are Ossoff’s talking points in a race against Republican Karen Handel that has shattered records as the most expensive congressional contest in U.S. history. Polls show it is headed for a tight finish in Tuesday’s special election.

An Ossoff victory would rattle Republicans already nervous about next year’s congressional midterm elections, and offer Democrats a template on how to campaign in suburban swing districts as they try to erase the 24-seat Republican majority in the House of Representatives.

“It would send a very strong message across the country that we can win these kinds of seats,” said Representative Dan Kildee, a Michigan Democrat who campaigned with Ossoff in Georgia this week.

Democrats have much riding on the outcome. On the surface, conditions seem ripe for a nationwide Democratic renaissance, with a historically unpopular Republican president entangled in an investigation for possible obstruction of justice and the Republican agenda largely stalled in Congress.

But Democrats lost two special House elections earlier this year in conservative Kansas and Montana districts that Trump won by double digits last November. A failure in a more competitive district in Georgia, which Trump carried by just 1 percentage point, would be a morale killer for a party that has struggled to develop a coherent message beyond “We’re not the party of Trump.”

Democrats have steadily lost ground in recent years in state and local races. Republicans not only control the White House and both chambers of Congress, but also hold 33 governor’s offices, the most in nearly a century.

Infighting between grass-roots progressives and the party’s more mainstream wing has plagued Democrats, who have appeared increasingly vulnerable to Republican attacks portraying them as coastal elites out of touch with working-class Americans.

Ossoff’s “Make Trump Furious” slogan quickly endeared him to national anti-Trump activists and pushed him well ahead of 17 rivals in polls in April’s non-partisan primary in a district represented by Republicans for decades.

It wasn’t enough. The 30-year-old former congressional staffer and documentary filmmaker fell just short of a majority, and outright victory, forcing a closely watched run-off against Handel for the House seat vacated by Tom Price, the new secretary of health and human services who was first elected to the House in

But the grassroots enthusiasm has made Ossoff a fundraising machine. He raised a stunning $24 million by the end of May, five times the amount raised by Handel, a former Georgia secretary of state. Republican outside groups have helped her make up some of the difference, spending nearly $9 million on her behalf, according to fundraising reports.

Total spending has approached $40 million, obliterating the previous record of $30 million for a Florida congressional race in 2012.

While he benefits from the grassroots anti-Trump fervor, Ossoff has deliberately avoided making the race a referendum on Trump. On the campaign trail and in ads, he promises to work with Republicans and focuses on his plans to bolster local economic development, protect access to healthcare, particularly for women, and cut wasteful spending to pay for new priorities.
Ossoff said voters in the district are not demanding that he lead an anti-Trump resistance.

“I think voters are more concerned with accountability and results than they are with political drama,” he said in an interview after a meeting with millennial supporters.

While voters’ concerns about the administration have grown, he said, “Fundamentally what folks are looking for is representation that will work across the aisle to deliver a higher quality of life.”
Handel, who also rarely mentions Trump and has argued that the race should be about who has the values and experience to best serve the district, says Ossoff is misrepresenting himself.

“He’s trying to portray himself as something that he is not. He is Nancy Pelosi’s hand-picked candidate,” Handel told reporters this week after greeting diners at a local hamburger restaurant, repeating a line about House Democratic leader Pelosi that has featured prominently in attack ads against Ossoff by outside groups.

“He is an ultra-liberal. His values do not align with this district,” she said.

Some of her supporters agree. Terry Anderson, 67, a retired IT worker from Cobb County, said he did not believe Ossoff was sincere. “He sounds more like a moderate Republican all the time,” he said.

But Brenda Carswell, 61, a retired American Express employee from the city of Tucker who said she typically has switched back and forth between Republicans and Democrats – “I’ve voted for some Bushes and I’ve voted for some Clintons” – said she is backing Ossoff.

“He’s been mostly discussing issues that people care about. The problems in our area are more important than most of what they talk about in Washington,” she said.

Trump, who visited Georgia to raise money for Handel in late April, is watching closely. On Twitter, he criticized Ossoff, and after Ossoff was forced into a runoff he crowed that Democrats “failed in Kansas and are now failing in Georgia.” Trump called the race “Hollywood vs. Georgia.”

Several recent polls have given Ossoff a slight edge heading into Tuesday, while showing that there are few voters who are still undecided.

Democrats say the increasingly diverse area exemplifies the sort of educated and affluent suburban district that Democrats will need to win to recapture the House.

Georgia-based Democratic strategist Tharon Johnson said Ossoff’s non-ideological messaging should be a model for a party that needs moderates, independents and disaffected Republicans next year.

“He’s done a good job of positioning himself as a sensible Democrat,” he said. “He doesn’t need to tell voters what is wrong with Trump – people see the drama and the problems every day.”