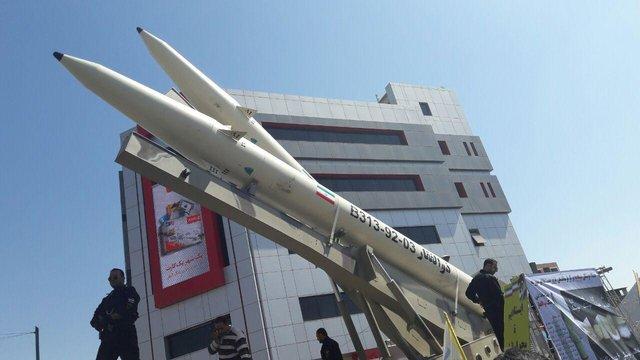 TEHRAN, Iran (AP) — Iran staged anti-Israel rallies across the country on Friday, with protesters condemning Israel’s occupation of Palestinian territories and chanting “Death to Israel” as the powerful Revolutionary Guard displayed its ballistic missiles, including the type used this week in Syria.

Marchers in Tehran headed from various points of the city toward the Friday prayer ceremony at Tehran University campus grounds. Protesters burned the Israeli and the American flag, as well as effigies of Israeli leaders.

State media reported that similar rallies were underway in other cities and towns in Iran.

The anti-Israel rallies are an annual event marking al-Quds Day, a historic Arabic name for Jerusalem. Iran sees it as an occasion to express support for the Palestinians and emphasize the importance of Jerusalem for Muslims.

Iran doesn’t recognize Israel and staunchly backs militant groups that are opposed to it, including the Palestinian Hamas that runs the Gaza Strip and the Lebanese Shiite militant Hezbollah group.

Rouhani told reporters that the rally was Iran’s response to the U.S. violations of the “rights of people” of Iran after the Senate last week approved new sanctions on Tehran over its missile program, something Congress is expected to decide on soon.

Larijani, in a speech to Tehran demonstrators, called Israel the “mother of terrorism” and said that in the “20th century, there was no event more ominous than establishing the Zionist regime.”

The rally also inaugurated a huge digital countdown display at Tehran Palestine Square, showing that Israel will allegedly cease to exist in 8,411 days.

In 2015, Iran’s Supreme Leader Ayatollah Ali Khamenei predicted that after 25 years — by 2040 — there will no longer be a State of Israel.

Iran’s powerful Revolutionary Guard used the demonstration on Friday to showcase three surface-to-surface ballistic missiles, including the Zolfaghar — the type that Iran used this week to target the Islamic State group in Syria. The Guard said it fired six such missiles on Sunday at IS targets in the city of Deir el-Zour, more than 600 kilometers (370 miles) away.

Another missile on display at the Tehran rally was the Ghadr, with a range of 2,000 kilometers (1,250 miles) that can reach both Israel and U.S. bases in the region.

Iran holds al-Quds day rallies held each year on the last Friday of the Muslim holy month of Ramadan, which is expected to end this weekend. Iran has marked the day since the start of its 1979 Islamic Revolution, when the country cut relations with Israel.

The Guard said the Iranian airstrike in Syria was in retaliation for an IS attack earlier in June on Iran’s parliament and a shrine in Tehran that killed 18 people and wounded more than 50.