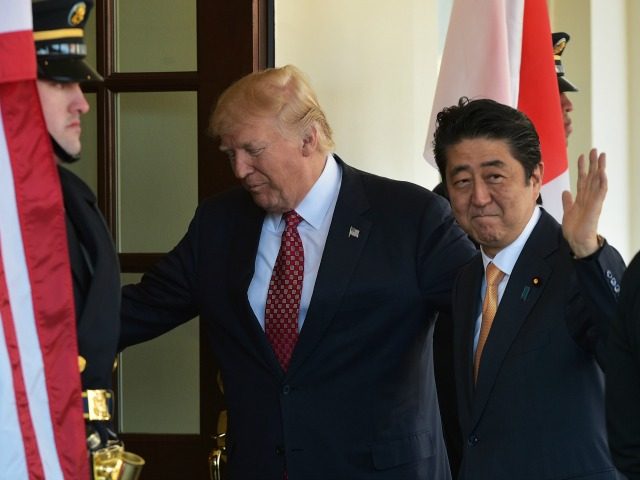 “I completely agreed with President Trump that we, too, have to take further action. We will proceed with concrete actions to heighten the system and capabilities for defense,” Abe told reporters following the conversation Monday, according to Japan’s Asahi Shimbun.

In a readout of the call, the White House confirmed that “President Trump and Prime Minister Abe committed to increasing economic and diplomatic pressure on North Korea, and to convincing other countries to follow suit,” adding that Trump “reaffirmed our ironclad commitment to defend Japan and the Republic of Korea from any attack.”

“Japan and the United States have made efforts to resolve the North Korean issue peacefully, but North Korea has trampled down all those efforts. The international community, including China and Russia, must take this undeniable fact seriously and heighten pressure,” Abe affirmed following the call, adding that more joint military exercises between the two countries could also be used as a further response to North Korea. Asahi cites the Japanese government confirming that the two leaders spoke for 52 minutes.

“I am very disappointed in China. Our foolish past leaders have allowed them to make hundreds of billions of dollars a year in trade, yet they do NOTHING for us with North Korea, just talk,” President Trump wrote on his Twitter account this weekend. “We will no longer allow this to continue. China could easily solve this problem!”

United Nations Ambassador Nikki Haley rejected the idea of convening the UN Security Council, stating, “there is no point in having an emergency session if it produces nothing of consequence” and pressuring China, the president of the Security Council, to act.

Japan appears to be following America’s lead on the issue both due to the proximity of the missile launch to Japanese territory and the current state of Japan’s defense leadership. On Friday, Japan’s Defense Minister Tomomi Inada resigned, along with two other officials, over Japan’s role in peacekeeping operations in South Sudan. Japan’s Foreign Minister Fumio Kishida has taken the reins of the defense ministry temporarily, limiting the functionality of both ministries.

In addition to strong support from Japan, the Trump administration is growing closer to South Korea’s new administration under President Moon Jae-in, a leftist expected to take a less hard-line stance on North Korea than predecessor Park Geun-hye. Moon responded to the latest missile test, however, by reaching out to the United States and ordering more units of the American Terminal High Altitude Area Defense (THAAD) missile defense system, designed to protect from North Korean attack. As a candidate, Moon had expressed reservations about the THAAD system and ordered a halt on receiving more units.

“Full-swing discussions with the U.S. will also start soon for the deployment of additional launchers,” Moon said this weekend.

Seoul confirmed Monday it is seeking a one-on-one meeting between Defense Minister Song Myoung-moo and American Secretary of Defense James Mattis. “The envisioned meeting is likely to focus on curbing North Korea’s nuclear and missile threats and issues between the two allies, including a revision of a ballistic missile guideline and a U.S. missile defense system,” according to South Korean newswire service Yonhap.

The South Korean defense ministry announced Monday they expect North Korea to conduct more such missile tests. “There is a possibility that North Korea is likely to test its nuclear warhead and missile capabilities through a nuclear test with more explosive power,” a ministry official suggested in a report to the National Assembly.