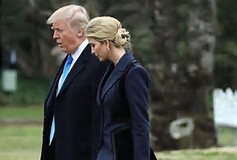 PROVIDENCE, R.I. (AP) — A proposal for paid parental leave championed by Ivanka Trump could go back to the drawing board.

Two weeks after the plan was outlined in President Donald Trump’s budget proposal, his daughter and adviser signaled she is open to other strategies for providing the benefit for new parents. Ivanka Trump met this week with a bipartisan group of scholars pitching a different paid-leave approach.

“She said that was just a placeholder or a stake in the ground and they’re open to other ideas,” said Isabel Sawhill, a scholar at the liberal-leaning Brookings Institution who came to the White House to present the alternative plan she authored with Aparna Mathur, of the conservative American Enterprise Institute.

A White House official said that the plan outlined in the budget was their initial effort and that the administration remains open to revising it. The official, who was not authorized to speak publicly and talked to The Associated Press on condition of anonymity, said Ivanka Trump is meeting with elected officials and stakeholders inside and outside government to solicit feedback.

Of course, wherever the details wind up, the White House faces the challenge of persuading a Republican-led Congress with many other priorities. GOP lawmakers are focused on overhauling the tax code and repealing President Barack Obama’s health care law, and are less eager to take on a proposal that would typically be a Democratic priority.

The initial proposal from the Trump White House — a departure from Republican orthodoxy — would provide six weeks of paid leave to new mothers, fathers and adoptive parents. Under the plan, states would be required to finance the benefit through unemployment insurance programs and would be “expected to adjust” their tax structures if their funds don’t have enough money.

Such an adjustment would likely require higher taxes on businesses, which pay for unemployment benefits through employer payroll taxes. States could opt out if they offered a different benefit.

Response to the proposal has been mixed. Democrats, who traditionally support paid leave, say they would prefer a more robust benefit that also covers people caring for sick relatives. And both Democrats and Republicans raised questions about the cost burden for states.

“We can’t take any more unfunded mandates from the federal government,” said Virginia Gov. Terry McAuliffe, a Democrat, adding he would support a federal leave program if it was paid for.

Iowa Gov. Kim Reynolds, a Republican, said: “I want to take a look at being able to provide that opportunity for parents, but you know, like everything else, sometimes there’s a cost to it.”

In defending its original proposal, the White House had said that unlike a federally run paid leave program, a state-based approach would allow states to set financing and benefits that make sense to them. They also said reforms to the unemployment insurance system could help offset the cost.

The AEI-Brookings plan, like the Trump plan, is for parents only, excluding care for sick relatives to save on costs. It calls for eight weeks of guaranteed paid parental leave at 70 percent of a person’s wages, limited to $600 a week. It would be financed through the federal payroll tax on employees, as well as other budget savings, with states free to expand the benefits further if they can.

Abby McCloskey, a Republican economist who helped craft the alternative plan, said the original Trump idea was a “great start” that will encourage Republicans to start engaging the topic, but she was critical of its lack of a clear funding source. She said the “muted” reaction so far from politicians is because it presents problems for both parties.

“It’s not as generous as Democrats would like, and it’s an unfunded program, which Republicans don’t like,” she said. But she said the Trump team “seems very open to input and advice” and she was optimistic that common ground could be found.

Rhode Island, California and New Jersey, to be joined by New York next year, all offer paid parental leave programs funded either partially or entirely through employee payroll deductions made to a temporary disability fund.

In Rhode Island, Elena Tenenbaum is on leave from her job as a psychology researcher to care for a daughter born in April. The Trump plan is a step in the right direction, she said, but she has “serious concerns about this being lip service” and not a workable proposal.

“It’s a wonderful thing that Rhode Island has this,” said Tenenbaum, who combined state-supported leave with some unpaid time off. “I can’t imagine how you make it work without any financial support.”

(First reported by AP News and retrieved from Townhall) https://townhall.com/news/politics-elections/2017/06/09/ivanka-trump-signals-flexibility-on-paid-parental-leave-n2338626