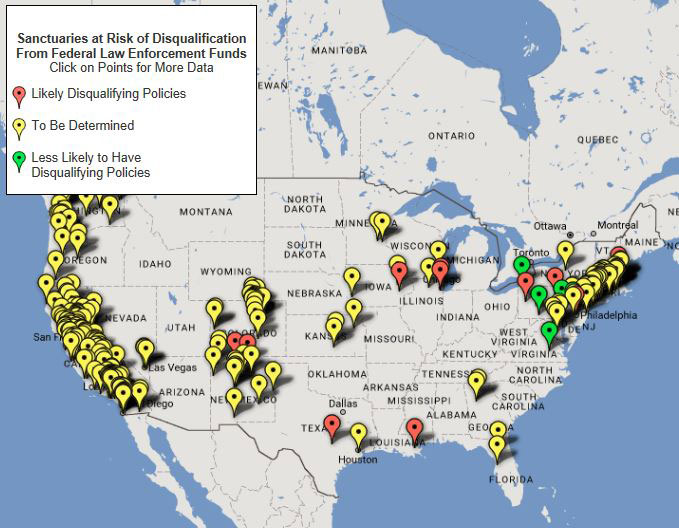 The Department of Justice announced last week that sanctuary jurisdictions will lose access to certain federal law enforcement grants in 2017 if they prohibit officials from communicating with Immigration and Customs Enforcement, if they block ICE from interviewing jail inmates, or if they fail to notify ICE of the pending release of criminal aliens ICE is seeking to deport.

These particular grants, known as the Byrne Justice Assistance Grants, are the largest source of federal criminal justice funds for state, local, and tribal authorities.

This move is helping fulfill one early promise of the Trump administration: to impose consequences on the most egregious of the more than 300 sanctuary jurisdictions.

It is significant because a large share of the funds awarded in this program go to sanctuary jurisdictions. For example, according to Justice Department records, the four largest grants, and seven out of the top 10 recipients of the Byrne/JAG grants are sanctuaries.

Under the new rules announced by Attorney General Jeff Sessions, these four top grant-getters (New York City; Cook County, Illinois; Los Angeles; and Philadelphia) are likely to be disqualified from these grants in the future if they maintain their current policies toward ICE.

These cities received more than $10 million in grants in 2016.

Ten sanctuaries are already at risk of debarment based on an initiative launched last year by Rep. John Culberson, R-Texas, chairman of the House Appropriations subcommittee that controls the Justice Department’s budget.

Last year, the department notified 10 of the worst sanctuaries that their Justice Department law enforcement grants could be pulled if they did not come into compliance with the federal law prohibiting sanctuary policies.

In April 2017, the Justice Department sent letters to nine of the jurisdictions (all but Connecticut) reminding them that by a deadline of June 30, they had to send documentation of compliance with the law or lose certain funding (and potentially face clawbacks of previously awarded funding)

The documentation of “alleged compliance” is currently under review and the results are expected soon. Sessions has said their statements will be reviewed carefully: “It is not enough to assert compliance, the jurisdictions must actually be in compliance.”

Last Tuesday’s announcement makes clear that the Justice Department is not looking merely at bare minimal compliance with the letter of Section 1373, the federal law that prohibits policies that block communication between local officials and federal immigration agencies, which many sanctuaries dubiously claim to meet.

Some jurisdictions have milder versions of sanctuary policies that may not lead to disqualification from grants under the Justice Department rules announced Tuesday.

Under the new rules, these counties and others may still maintain eligibility for grants if they continue to cooperate fully with ICE.

A new map shows the jurisdictions that are most likely to fail to meet the new requirements, those that likely can meet requirements with their current policies, and a large number that could go either way.

The Byrne/JAG grants are one of three programs now off limits to sanctuaries. Last year, Culberson imposed requirements for basic compliance on the State Criminal Alien Assistance Program, which offers partial reimbursement for the costs of incarcerating illegal aliens, and the Community Oriented Policing grant program.

How much money is at stake in the Byrne/JAG program? The Trump administration reportedly is seeking $380 million for the program in 2018.

The table below shows a list of sanctuary jurisdictions that received these grants in 2016 and the amount of the grant.