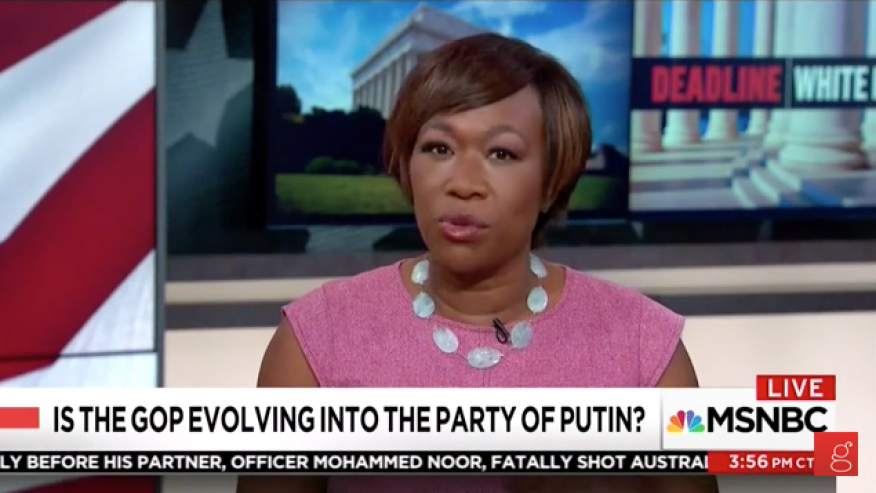 MSNBC’s Joy Reid, host of AM Joy, believes Republicans are becoming big Vladimir Putin fans based on the fact that they see him advancing some type of “white Christianity.”

“My old Cold-warrior Reaganite father must be spinning in his grave to know that the United States which used to– he’s African, so the desire to limit the expansion of Russian spheres of influence led us to support the apartheid government of South Africa over Nelson Mandella. Now we have a Republican party that not only at its base is becoming Putinite, pro-Putin — you’re seeing it accelerate.”

Wallace chimed in, saying, “It’s not just the president. There are loud voices in conservative media who celebrate [Julian] Assange, who praise the brute strength of Putin.”

“That’s right. And for a lot of reasons the alt-right — for these sort of weird white nationalist reasons — they feel he’s advancing white Christianity. Whatever it is, Russia is an adversary of the United States, wants to dismantle our influence in Europe. Trump seems to agree, he seems to agree that we should have less influence in Europe, that we should detach ourselves from the NATO alliance. That we should even dismantle our own cybersecurity and make ourselves more vulnerable to Russia, make ourselves more vulnerable to their influence.

“It’s shocking to see a Republican president essentially capitulate to almost everything Vladimir Putin could possibly want, the full menu, his Christmas list of what he wants from the United States and wants to do to the West. Donald Trump wants to give him it.”