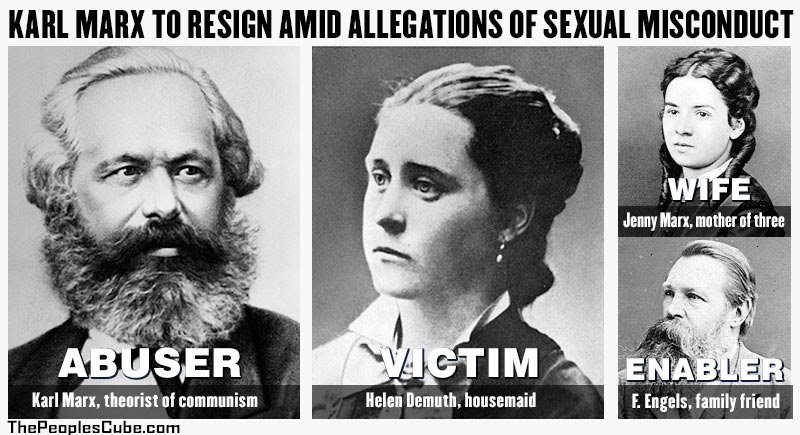 The father of scientific socialism and an inspirational figure to many leading Democrats, Karl Marx has announced that he is resigning as a seminal thinker and is asking all his followers, especially women, to forgive him and forget his doctrine of class conflict and communist internationalism due to allegations of sexual abuse of his female aide and a criminal conspiracy to cover it up.

In his remarks, the author of the Communist Manifesto stated, “This decision is not about me. It’s about the workers of the world. It’s become clear that I can’t both continue to deal with my history of sexual misconduct (some of which I remember differently) and at the same time remain an effective messianic leader of the oppressed in their struggle against capitalist exploitation.”

Marx continued, “As a white cisgendered heterosexual male, I have cheated on my wife, sexually assaulted my subordinate, and otherwise abused my power and privilege to hurt and victimize women. I therefore feel that I no longer have the right, nor the moral authority to defend my philosophy of class victimization, to incite class hatred, provoke violent anti-bourgeois revolutions, and establish proletarian dictatorships.”

The pressure on the leader of the exploited masses to step down has been mounting for days, ever since the New York Times broke the story about how Mr. Marx, a husband and a father of three, sexually exploited his longtime family maid, Helen Demuth. Fearing to lose her job in a volatile capitalist economy, Ms. Demuth yielded to her employer’s sexual harassment. What started as inappropriate touching and groping, soon escalated into what legally amounts to sexual assault in the workplace, which continued daily for years in Mr. Marx’s home, where Mrs. Marx and their daughters also resided.

According to The New York Times, the repeated sexual abuse of Ms. Demuth by her employer, compounded by the unavailability of women’s health services, resulted in the birth of a male child. Fearing that this would destroy his reputation of a rebel against bourgeois morals, Karl Marx organized a conspiracy to cover up both the affair and the baby. His co-conspirators were his close friend and collaborator Friedrich Engels and Ms. Demuth – a powerless victim who was intimidated into silence by the men in positions of power.

The conspiracy involved abandoning the child, Freddy Demuth, who ended up being one of the many fatherless inner-city clients of foster care. Upon discovering the truth, Karl Marx’s wife, Jenny Marx, committed suicide. Their daughter, Laura, killed herself several years later.

Some House Democrats called on Karl Marx to leave office last Thursday, increasing pressure on the veteran revolutionary thinker to abandon his theories of social justice and economic equality amid serious allegations about his sexual transgressions, child abandonment, the cover-up, and infidelity that caused his wife and daughter to kill themselves.

Sunday on NBC’s “Meet the Press,” House Minority Leader Nancy Pelosi (D-CA) tried to defend Mr. Marx by blaming the attacks on Prussia’s meddling, adding that “Karl Marx is an icon in our academia.” Even if some of it is true, she said, “this episode only shows us how essentially human Marx is. He has the same fears, despairs, and guilts that afflict everyday Americans. That doesn’t mean, of course, that we can equate Karl Marx with Donald Trump or Roy Moore.”

On Monday, however, more than half of the Democrats in the Senate, including party leadership, called for Marx to step down, fearing that “creepy” evidence of his duplicity and hypocrisy might tarnish their political futures and weaken efforts to unseat President Trump.

“I consider Karl Marx a beacon of progress and greatly respect his accomplishments, but he has a higher obligation to his followers, and he should step down immediately,” Sen. Chuck Schumer (D-NY) said in a statement.

In a change of heart, Pelosi later clarified her position. “Zero tolerance means consequences for everyone,” she said at Tuesday’s news conference. “No matter how great the legacy, it is no license to harass or discriminate. In fact, it’s even more disappointing.”

Some observers have pointed out the historical inevitability of Marx’s downfall as the leading political theorist, whose teachings about a worldwide conspiracy of oppressors against their victims have given birth to modern feminism, without which renouncing Karl Marx’s legacy due to his sexual misconduct and his overall creepiness would have been impossible.