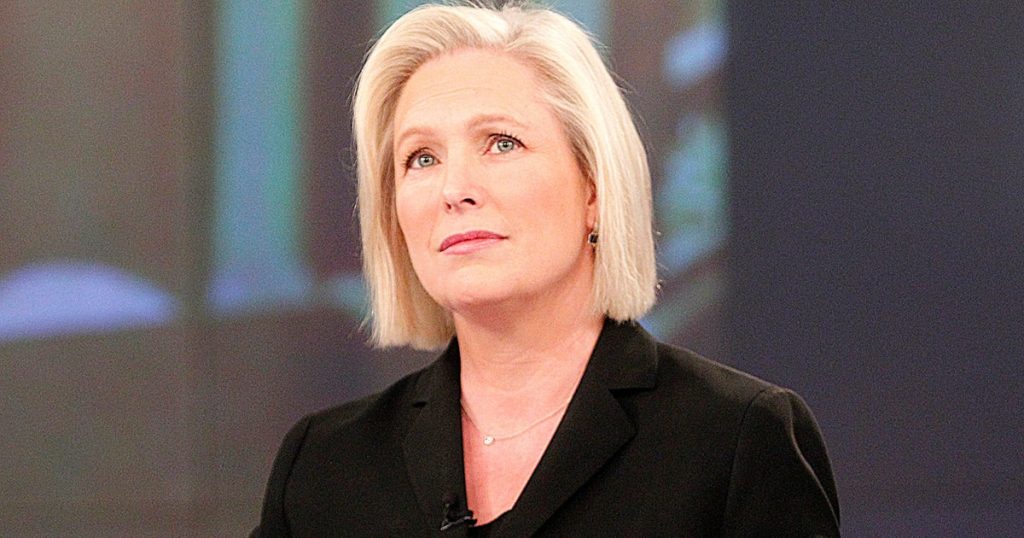 Someone told her she should be president? Why? Who knows. Maybe it was funny at the time. And despite having accomplished nothing, except getting the nod for a job she was unfit for because of political connections, Senator Gillibrand is trying to become President Gillibrand, forcing the entire nation to have to learn to spell her name.

The trouble is that Senator Kirsten Gillibrand has no accomplishments to her name. So she boosted her brand by claiming to have been the victim of sexual harassment. That’s not quite enough to be president. So she tried to jump on the #MeToo movement.

And then it all fell apart.

Democratic Sen. Kirsten Gillibrand (N.Y.) said Thursday that Bill Clinton should have resigned the presidency over his relationship with Monica Lewinsky, although she campaigned alongside him for both her and Hillary Clinton’s runs for office after he left the White House and previously said she was “truly honored” by his support.

Then she tried to back away from it.

Sen. Kirsten Gillibrand, D-N.Y., did not reiterate Sunday whether she thought former president Bill Clinton should have resigned over the Monica Lewinsky scandal in the 1990s, saying only “it would have been a very different conversation” had the controversy occurred in 2017.

Then a top Hillary donor went on the warpath and threatened to withhold cash from #MeToo senators.

One of Hillary Clinton’s wealthy pals paid $500,000 in an unsuccessful effort to fund women willing to accuse President Trump of sexual misconduct before the 2016 election, The New York Times reported Sunday.

Susie Tompkins Buell, the founder of Esprit Clothing and a major Clinton campaign donor for many years, gave the money to celebrity lawyer Lisa Bloom who was working with a number of Trump accusers at the time, according to the paper’s bombshell report.

One of the Democratic Party’s biggest donors says she is reconsidering her support for the women in the US Senate who called for Al Franken’s resignation following multiple allegations of sexual misconduct and inappropriate touching.

The San Francisco–based donor, Susie Tompkins Buell, 75, has given millions of dollars to Democratic causes since the 1990s. She is best known as a staunch supporter of Hillary Clinton, but has also contributed for decades to Democratic women senators, hosting a regular spring fundraiser for the lawmakers in California called “Women on the Road to the Senate.”

In two interviews this week, Buell described the push for Franken’s departure as “unfair,” “cavalier,” and somewhat politically motivated — “a stampede,” “like a rampage,” she said, speaking in stark terms about senators she has backed for years, naming Gillibrand in particular.

“They need to know that some of their biggest supporters are questioning why they did that,” Buell said.

Now the aspiring presidential candidate would like everyone to know how much she loves Hillary.

Sharyn Alfonsi from CBS News’ “60 Minutes” asked Gillibrand, who for years was a beneficiary of the Clintons’ support, whether she has been in communication with the Clintons.

“Well, I don’t want to talk about that, but, I can tell you one thing … Hillary Clinton is still my greatest role model in politics,” Gillibrand said.

Now please forgive me and send me cash