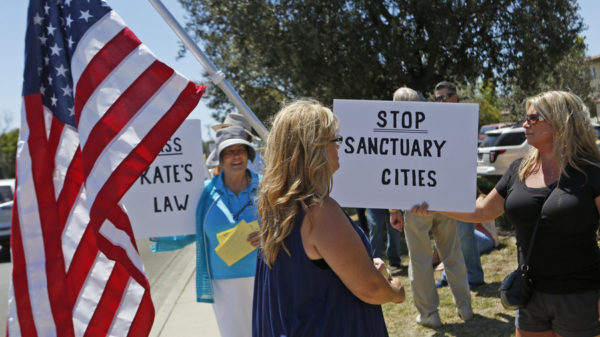 Two major immigration enforcement bills are expected to go before the U.S. House this week for a vote – including “Kate’s Law” and a sanctuary city de-funding bill. Passage of these important bills will help deliver on campaign promises made by President Donald Trump and Republicans in Congress during the last election cycle.

The “No Sanctuary for Criminals Act,” (H.R. 3003) by Republican Representatives Bob Goodlatte (R-VA), Steve King (R-Iowa), and Andy Biggs (R-AZ) takes aim at sanctuary policies that endanger communities in America. The bill denies federal law enforcement grants to “sanctuary” jurisdictions that do not allow their law enforcement personnel to communicate with U.S. Immigration and Customs Enforcement (ICE) officials. It also shields those jurisdictions that comply with federal immigration detainers from being sued. Victims of crime committed by criminal aliens would be able to sue these entities for the harm caused them by these illegal policies. The law also clarifies the authority for ICE to issue detainers by setting out probable cause standards.

“For years, the lack of immigration enforcement and the spread of dangerous sanctuary policies have failed the American people and cost too many lives,” Goodlatte said in written statement obtained by Breitbart Texas. “The deaths of innocent Americans, such as Kate Steinle, Sarah Root, Grant Ronnebeck, and too many others, are tragic. Their deaths are especially devastating since they could have been prevented if our immigration laws had been enforced.

For Congressman Goodlatte to give police protection from lawsuits, we think is hugely important,” Dale Wilcox, general counsel and executive director for Immigration Reform Law Institute told Breitbart Texas on Monday. “Anti-borders lawyers are flooded with money from people like George Soros and others and they routinely sue police departments for ‘violating’ the supposed constitutional rights of illegal aliens. Many of the sheriffs we speak to are constantly worried about these suits due to their budget constraints and the general lack of support they receive from their state and from the federal government. This has to stop.”

“When Obama sued Arizona for passing pro-enforcement legislation, anti-borders activists said state and local government must follow federal law on immigration,” Wilcox continued. “But when it comes to sanctuary policies, they say the exact opposite. It shows they’ll stop at nothing when it comes to erasing America’s borders.”

“Sarah and Grant’s Law,” named for Sarah Root and Grant Ronnebeck who were killed by illegal alien drunk drivers, would safeguard communities by ensuring that criminal aliens convicted of drunk driving or other dangerous crimes would not be let out of jail pending their removal proceedings. A drunk-driving illegal alien allegedly killed Sarah Root was killed when she was just 21-years-old. After being charged with manslaughter, the illegal alien made bond and fled from the United States. He killed Sarah just one day after she graduated college with a 4.0 GPA, her family stated previously. Official reports indicate the illegal alien rear-ended her vehicle when he was driving over 70 mph. The collision severed Sarah’s spine and broke her skull in two places.

Twenty-one-year-old Ronnebeck was killed by a convicted illegal alien in 2015 while he was working the night shift at a convenience store in Mesa, Arizona. Ronnebeck was not counting the change fast enough so the “self-proclaimed member of the Sinaloa cartel, the Mexican Mafia,” murdered him. Although he had deportation proceedings pending, the convicted felon (sex crime and burglary convictions) was out on bond. Steve Ronnebeck told Breitbart News’ Michelle Moons in September 2015 that a member of the Mexican cartel “executed my son.”

Also before the U.S. House is “Kate’s Law,” House Resolution 3004 (H.R. 3004) which enhances the criminal penalties for deported felons who come back into the United States. As reported by Breitbart News, Francisco Sanchez, coldly executed 32-year-old Kathryn Steinle (“Kate”) in a random attack when she and her father, Jim Steinle, were visiting Pier 14 in San Francisco, California. He shot her in the chest and then tossed his weapon in the ocean waters. The last words Steinle heard from his daughter was “Help me, Dad.” She died a few hours later in her parents’ arms. Sanchez had been deported to Mexico on several occasions and was on probation in Texas.

These bills are listed on the House calendar for possible consideration this week.

The House Judiciary Committee is working to improve our nation’s immigration laws and policy, and today I have introduced two, straightforward bills to enhance public safety. The bills crack down on dangerous sanctuary policies that needlessly put innocent lives at risk. They enhance penalties for deported felons who return to the United States and ensure unlawful immigrants convicted of drunk driving, or arrested for other dangerous crimes, are detained during their removal proceedings. We owe it to the families of those who lost loved ones to take action to prevent these horrible crimes. They have waited far too long.

Rep. Goodlatte is the chairman of the House Judiciary Committee.

“withholds certain federal grants from jurisdictions that violate federal law by prohibiting their officers from communicating with ICE”;

“protects jurisdictions that comply with detainers from being sued”;

“allow[s] victims of crime to sue jurisdictions that refuse to comply and subsequently release criminal aliens onto the streets”;

“ensures unlawful immigrants convicted of drunk driving or arrested for other dangerous crimes are detained during their removal proceedings.”