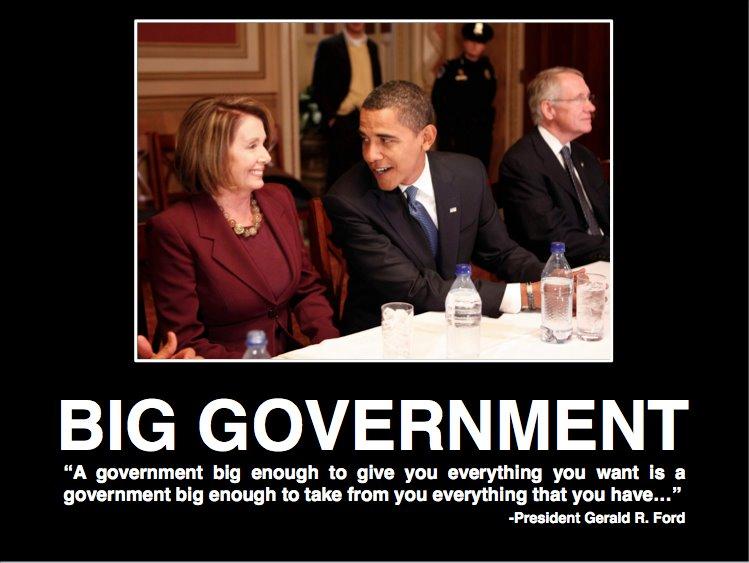 For more than eighty years, beginning with FDR’s New Deal, Americans have witnessed a constant increase in the size and scope of the federal government. This expansion has continued unabated during both Democratic and Republican administrations.
Whether measured in terms of dollars spent, or in terms of percentage of Gross Domestic Product (“GDP”) consumed by the federal government, big government has become inexorably bigger.

The growth of the federal civilian workforce has slowed since 1960 – levelling off between 2.5 and 3 million – but this has masked the transfer of federal programs to state and local bureaucracies. Since 1960, the number of state and local government employees has tripled to over 18 million. This growth has been driven by a tenfold increase in federal grants to cities and states.

For conservatives, this trend has been depressing. We plead for smaller government, but our cries have been futile as Congress and state legislatures refuse to make significant or lasting cuts in the size of government. The growth of the Leviathan has seemed unstoppable.

The forces pushing the expansion of government are powerful. Bureaucrats justify their existence by spending every dime appropriated to their agencies and then asking for more. Politicians of both parties find it easier to win votes by serving up pork than by offering austerity. Congresses deals with every crisis by spending money. And the progressive Left continually pushes the growth of entitlements for its own political advantage.

Fortunately, there is now hope in the fight against big government. There is a demographic sea change at work – something that has the potential to shift the forces in favor of conservatives who are serious about shrinking government. The baby boomers are retiring.

The baby boomer generation – those born between 1946 and 1964 – includes 76 million Americans. Over a 19 year period that started approximately in 2011, virtually all of them will retire. That’s an average of four million people retiring every year, or nearly 11,000 every day.  And a large percentage of them are working for the government. Government agencies across the federal government, as well as in state and local governments, are seeing a slew of retirements.

Take the Social Security Administration. Starting in 2011, the SSA began seeing 4,000 retirements a year. The same is happening throughout the federal government. The bureaucrats see this as a crisis.  Conservatives should see it as an opportunity.

Attrition through retirement is causing federal and state workforces to turn over. Many of these retirees need not be replaced. The size of government can be dramatically reduced simply by making the decision not to fill every vacancy. And it doesn’t take an act of Congress to do it.  All it takes is political will in the executive branch not to fill vacancies. The only exceptions should be law enforcement agencies and the military.

But can it really be done in practice? The answer is yes, it can. I know because I’ve done it. Shortly after I became Kansas Secretary of State in 2011, I saw baby boomer retirements occurring in my own agency. Realizing this opportunity, I directed my deputies to reassign the duties of retiring employees to those who remained. Wherever possible, the open positions were not to be filled. We left approximately 1/3 of the vacancies unfilled.

Over the course of six years, I was able to shrink my agency’s workforce by 18 percent. We did it through natural attrition, without massive layoffs. The smaller payroll, along with other cuts, also allowed me to reduce agency spending by over 30 percent. And the agency is still carrying out all of the same responsibilities that it was back in 2011.

The same must be done in the federal government and in state governments across the country. President Trump has already taken the first steps.  In January he imposed a freeze on hiring. And in March he issued an executive order directing agencies to find redundancies and other ways to make cuts.  Looking at the bloated federal bureaucracy, he pointed out, “Today there is duplication and redundancy everywhere.” Consequently, “Billions and billions of dollars are being wasted.”

When the hiring freeze is lifted, as it eventually will be, President Trump should order the relevant departments to fill no more than 2/3 of the vacancies that exist. Without such an order, the career bureaucrats will carry on as before, deeming every position necessary to be filled.

The baby boomers are creating those vacancies by the thousand as they retire. Fortunately, this historic opportunity coincides with a President who is serious about cutting the size of government. If he declines to fill those vacancies and if state governors do the same, we could witness the first substantial reduction in big government in our nation’s history. But it will take political will to make it happen.