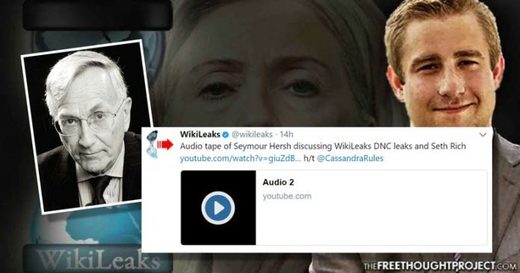 The MSM spent a tireless 24-hours attempting to lead the public away from knowing the truth about the Seth Rich case. NPR led the charge publishing a piece titled “Behind Fox News’ Baseless Seth Rich Story: The Untold Tale”, a piece they will no doubt have to HEAVILY retract and apologize for. NPR attempts to disprove the story after they had gained access to a lawsuit against Fox News by Rod Wheeler. Wheeler is a former Fox contributor and the D.C. detective hired by Ed Butowsky, at the request of the Rich family, to investigate their son’s murder.

Today, even more light has shined on the story of Seth Rich’s “mysterious” murder and subsequent coverup. The lead homicide detective assigned to the case by the Washington, D.C. Metropolitan Police Department gave him “strict rules” not to discuss the case.

According to notes, the meeting that took place between Detective Joseph DellaCamera and Detective Rod Wheeler raised more red flags than it did provide any substantive closure to the case.

This was revealed in a leaked email from Rod Wheeler obtained by Big League Politics. Detective DellaCamera made it clear to Wheeler, “I have strict, strict rules by my bosses, because of what this case is, that says don’t provide information out, other than what is already publicly out there. I just can’t go into detail with what I know.”

Gateway Pundit has gone through the first leaked email obtained by Big League Politics and has posted some of the more disturbing details from it:

He stated that the investigation is somewhat stalled, as he has no suspects or persons of interest in the case. Further, upon being asked specifically about what the working theories are surrounding the death, he said he “still believes” Seth’s death was the result of a “robbery gone bad.”[…]

DellaCamera stated that he (police investigators) have exhausted their search for any additional video surveillance footage that may be out there.[…]

When asked specifically was there any information located on any of Seth’s computers that would indicate that he did in fact send emails to WikiLeaks, DellaCamera replied, “there is certain information that I can’t provide regarding the case itself, and I hope you understand, like I said, I can’t reveal detailed information about the case itself.” “I have strict, strict rules by my bosses, because of what this case is, that says don’t provide information out, other than what is already publicly out there. I just can’t go into detail with what I know.”[…]

At this time DellaCamera was asked is it a possibility that emails were found on Seth’s computer related to the DNC and this could be a motivation for his being killed? DellaCamera replied, “anything’s possible; I can’t say one way or the other…..”[…]

I (wheeler) haven’t been able to rule out that someone from the DNC could have been responsible for Seth’s death. […]

DellaCamera replied, “again, I can’t go into details with specifics about the case such as that…I really can’t. Nothing against you, Rod but I’m just not trying to get myself jammed up.” DellaCamera was asked, “so the higher-ups in the department are very aware of this case?” He replied, “Oh yeah, for sure.”[…]

Wheeler asked, “and he never made any statements as to who could have shot him?” DellaCamera replied, “I can’t go into detail about that (sniff)….um, I just can’t Rod.”[…]

DellaCamera was asked, “here’s a fair question, can we rule it out that Seth’s death is definitely not related to the job?” He replied, “not, not to an extent..not just yet…we can’t rule anything out….” “I feel that if its related to the DNC, at some point, it may come out.” “If somebody gets locked up, and they’re like, I’m taking the heat for this, and their approached about somebody else, I feel like somebody’s going to start snitching then.” […]

Then Wheeler asked, “did your review of Seth’s computer reveal that any emails went out to WikiLeaks?” DellaCamera replied, (after a long pause), well, well…there’s stuff on there that, it’s its, emails are sent everyday….um…the context of the emails I can’t get into the details, um, again, I don’t have anything pointing the finger at the DNC other than the conspiracy theories. Nobody has come to me with direct information and provided detailed information about the DNC being involved somehow.”[…]

You can read the entire unabridged email at Big League Politics.