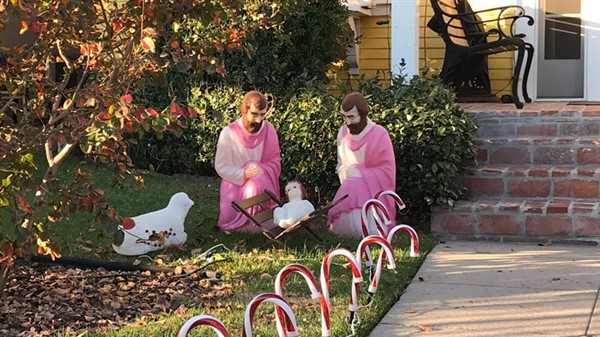 For the freaks on the left tis the season for bah humbug and random acts of sacrilege as all of the haters get into the holiday spirit for the annual war on Christmas.

Now that President Trump has made it clear that it’s ok to say “Merry Christmas” again and even brought a nativity scene to the White House there is much weeping and gnashing of teeth.

But the real nativity scene grabbing attention is a “Gaytivity” located in – where else – California.

Openly lesbian comic and LGBTQ ∞ activist Cameron Esposito launched a social media sensation when she tweeted out a picture of her neighbor’s sacrilegious portrayal of the baby Jesus with his two dads.

Our neighbors’ two Joseph nativity is up & I’m beaming 🎄👬 pic.twitter.com/7OKbFLU7v1

Needless to say, it was one Christmas display that put a big smile on the face of normally dour liberals who exulted via Twitter:

man the birth of jesus was DEFINITELY a miracle now

We all need a 'Gaytivity' scene in our yards. #gay #lgbt #LGBTQ pic.twitter.com/chbKqrUWoU

The Bible says that Jesus had two dads. I see nothing wrong with this.

The culture war will be escalated now that the left has Gaytivity mania which makes a nice bookend to the thugs who regularly take out their anger at Christianity by vandalizing the nativity scenes in the front yards of homeowners, those stories will sadly be coming soon enough.

Perhaps conservative talk radio kingpin Rush Limbaugh summed it up best on his show this week:

By the way, I’m told Twitter is blowing up. I’ll tell you, folks, some of this stuff, I’m just getting sick of it. There is apparently a children’s book depicting a gay Santa in a biracial marriage, and now a gay nativity scene is being popularized called gaytivity, two Josephs kneeling over the baby Jesus.

And there’s an article in a feminist publication called Refinery 29, describing the scene. “What if it wasn’t Mary and Joesph who met their child that night, but instead Murray and Joseph? Or Marty and Joseph?” Because, after all, they say, Jesus had two fathers. Remember Heather Has Two Mommies, the little kids’ book that was being forced on kids about 15 years ago in the New York public school system.

Now Jesus had two fathers, of course, God and Joseph. There’s not a woman in this gaytivity scene and yet a feminist group is publicizing this. But this is the kind of rot that’s permeating out there on social media that is further obscuring and blurring reality and tradition. It’s just this never-ending quest for people who don’t consider themselves to be normal to try to change that and be considered normal.

And it is yet again another attack on aspects of Western civilization and decency that knows no bounds. So now the gaytivity scene, which, by the way, you know, more and more American cities for a while there banned nativity scenes because it was forcing Christianity on nonbelievers. It was a violation of the First Amendment, forcing your religion on people.

Normalizing deviance is what liberalism is all about and to hell with everyone else. It’s sick enough when you can’t respect the sincere religious beliefs of others or even attempt to understand the warmth of the holiday season and what it means to traditional families, the cultural Marxists just want to shit on everything that may bring even the slighted bit of happiness to normal people.