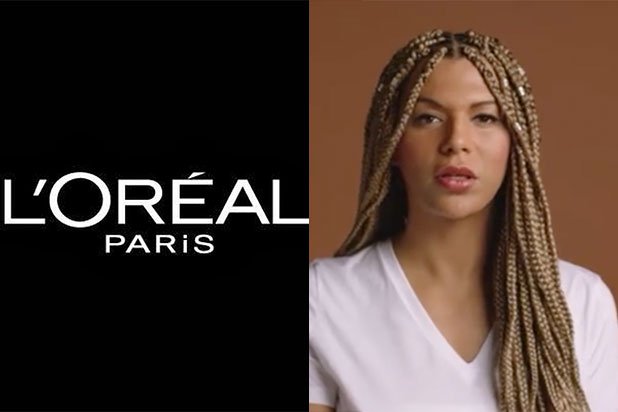 As intersectionality would have it, the transgender model is also a racist.

L’Oreal’s first ever transgender model, Munroe Bergdorf, was just canned from the company after unleashing an anti-white racist Facebook rant. Ironically, Bergdorf was signed on to the company’s True Match “diversity” campaign and dubbed “the face of modern diversity.”​

As we now know, he isn’t exactly a fan of diversity himself.

During the rant, Bergdorf deemed “ALL white people” racist. It was apparently lost on him that condemning an entire group of people based solely on their skin color is itself racist.

“Honestly I don’t have energy to talk about the racial violence of white people any more. Yes ALL white people,” wrote the 29-year-old.

“Because most of ya’ll don’t even realise or refuse to acknowledge that your existence, privilege and success as a race is built on the backs, blood and death of people of colour,” he continued.

“Your entire existence is drenched in racism. From micro-aggression to terrorism, you guys built the blueprint for this s***,” he said.

Bergdorf veered from former President Obama’s ballyhooed social media post in which he posited via a Nelson Mandela quote that racism and hate are learned, not inherent. To the trans model, white people are inherently racist.

“Come see me when you realise that racism isn’t learned, it’s inherited and consciously or unconsciously passed down through privilege,” he wrote.

“Once white people begin to admit that their race is the most violent and oppressive force of nature on Earth… then we can talk. … Until then stay acting shocked about how the world continues to stay f***** at the hands of your ancestors and your heads that remain buried in the sand with hands over your ears.”

The coward would later delete the rant, but, unfortunately for the racist, L’Oreal higher-ups already caught wind of the posts and swiftly acted to boot him as a representative.

“L’Oréal supports diversity and tolerance towards all people irrespective of their race, background, gender and religion,” a L’Oréal Paris UK spokesperson told The Sun. “The L’Oréal Paris True Match campaign is a representation of these values and we are proud of the diversity of the Ambassadors who represent this campaign.”

“We believe that the recent comments by Munroe Bergdorf are at odds with those values, and as such we have taken the decision to end the partnership with her,” continued the rep.

“L’Oréal remains committed to celebrating diversity and breaking down barriers in beauty,” the spokesperson added.

Bergdorf is now backtracking, sort of.

“This ‘rant’ was a direct response to the violence of WHITE SUPREMACISTS in Charlottesville. It was not written this week,” the fired model told The Sun.

“When I stated that ‘all white people are racist’, I was addressing that fact that western society as a whole, is a SYSTEM rooted in white supremacy — designed to benefit, prioritise and protect white people before anyone of any other race.”

He also revoked his explicit claim that racism is “inherited.”

“Unknowingly, white people are SOCIALISED to be racist from birth onwards. It is not something genetic. No one is born racist,” said Bergdorf.

Evading even a glimmer of responsibility, Bergdorf took shots at L’Oréal, essentially calling them racist.

“The irony of all this is that L’Oréal Paris invited me to be part of a beauty campaign that ‘stands for diversity,'” he said. “The fact that up until very recently, there has been next to no mainstream brands offering makeup for black women and ethnic minorities, is in itself due to racism within the industry.”

He continued to rant: “Most big brands did not want to sell to black women. Most big brands did not want to acknowledge that there was a HUGE demographic that was being ignored. Because they did not believe that there was MONEY to be made in selling beauty products to ethnic minorities. … If L’Oreal truly wants to offer empowerment to underrepresented women, then they need to acknowledge THE REASON why these women are underrepresented within the industry in the first place.”

Unsurprisingly, Bergdorf sang a much different tune about L’Oréal when first signed to the company, gushing about the brand on Instagram.

“Such an honour to become L’Oreal’s first transgender model in the UK,” he wrote in a post. “If you had told my 13 year old self that I would one day be featured in Vogue, with one of the biggest beauty brands in the world… I wouldn’t have believed you. I’m so happy.”