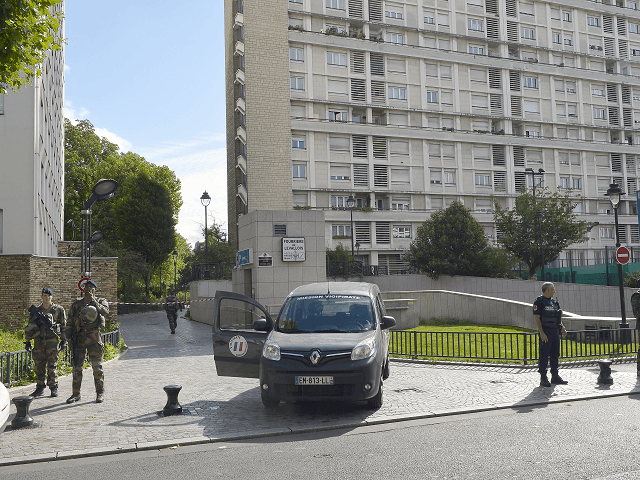 A 37-year-old man was arrested Wednesday afternoon in a gun battle after a manhunt was launched following an apparent attack in which French soldiers were hit by a car in a suburb of Paris.

It is reported that six soldiers of the 25th infantry regiment were injured in the incident, two of them seriously. Ouest France reports the car involved in the incident waited outside a French army barracks in Levallois-Perret, a suburb of Paris, driving into the soldiers as they left the facility at approximately 0815 Wednesday morning.

The car was driven away after it struck the soldiers, and police launched a manhunt. Six hours later, officers arrested a suspect who was driving north on the motorway in the direction of Calais, according to reports.

The arrested man, said to be the main suspect in the investigation, was hit in an exchange of gunfire with officers and was evacuated to hospital afterwards. His identity has not yet been revealed.

Levallois-Perret Mayor Patrick Balkany, who witnessed the strike, has called it “undoubtedly a deliberate act”, and said the car was “pre positioned” ready to strike in an act of “odious aggression”. However French police are urging caution in labelling it a terror attack, and have suggested it could have been an accident, reports BFMTV.

The soldiers were members of Operation Sentinel, which has seen up to 100,000 French troops deployed in a domestic counter insurgency operation protecting key tourist spots as well as schools, mosques, and synagogues. The military deployment has been involved in a number of confrontations with Muslim radicals since it began as part of a state of emergency declared by the French government.

The man had shouted 'Allah Akbar' as he crossed the security barrier https://t.co/VSYYw6WjC1

Operation Sentinel soldiers were engaged at the weekend, as Breitbart London reported, after a knife wielding man shouted Allah Akbar and pulled a knife at the base of the Eiffel Tower, Paris. The would-be attacker was apprehended without injury but an investigation has revealed he had links to the Islamic State and had said he wanted to launch an attack on a soldier.

In February, soldiers deployed on Sentinel opened fire on an Egyptian national at the Louvre museum after he pulled a machete out of a rucksack and shouted “Allah Akbar”. In addition to the knife, the man also had a quantity of paint in his rucksack, and it is reported he wanted to destroy artworks in revenge against the French state.

In another incident in March, a man was shot dead by Sentinel troops at Paris Orly airport after he grabbed a female soldier’s gun and took her hostage.

The apparent attack Wednesday morning comes just hours after Belgian police opened fire on a car in the Brussels suburb of Molenbeek, the notorious neighbourhood known as a hub for Islamic terrorism and linked with a number of successful attacks in Paris and Belgium in recent years. No Go Zones like Molenbeek are the focus of Breitbart London editor in chief Raheem Kassam’s forthcoming book No-Go Zones: How Sharia Law Is Coming to a Neighborhood Near You.

Based on extensive research visits to these problem suburbs, the book, which is now available for pre-order, has been praised by such counter-Islamification campaigners as Geert Wilders. Commending the work, Mr Wilders said: “Raheem Kassam’s book about the proliferation of no gone zones in our Western countries is a wake-up call. It is a very important book which should be read by as many people as possible because it shows that if we do not start to de-Islamize our societies and reestablish control over our own countries we are bound to lose them.”