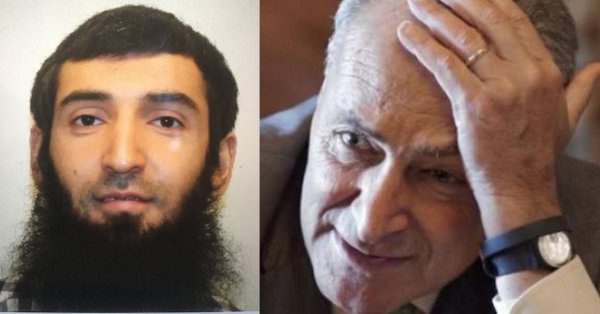 As the American people begin the healing process after Tuesday’s Manhattan terror attack, one curious question sticks out in the minds of many; How on earth did the terrorist Sayfullo Saipov gain entry to the U.S. from Uzbekistan? Blame Democrat Senator Chuck Schumer.

Under the “Diversity VISA Program,” Saipov immigrated to the U.S. in 2010.

What is the “Diversity VISA Program,”? It’s a lottery for individuals from nations with few immigrants in the U.S. The immigration program was the brainchild of none other than Senate Majority Leader Chuck Schumer (D-NY). Schumer, then a member of the House worked alongside lobbyists to write the “Diversity VISA Program,” which would form the basis of the “Immigration Act of 1990.”

Via the Numbers USA research report on the “Immigration Act of 1990”:

[…]Once the negotiators had reached an agreement that Sen. Simpson could live with, a conference committee was appointed. Within a four-day period, the conferees met, agreed and issued a report, and both the House and the Senate approved the final report.128 As passed, the Immigration Act of 1990129 included a Diversity Transition program that would allocate 40,000 visas per year in 1992, 1993 and 1994 to nationals of “adversely affected” countries, as defined by the 1986 diversity program.

According to Conservative Review, the U.S. has “admitted over 59,000 legal permanent residents from Uzbekistan since 2001.”

At the present time, Uzbekistan is not on President Trump’s travel ban, yet as Fox News Laura Ingraham urged on her program Tuesday evening, the time has come to include it on the list.

It would be especially wise to Uzbekistan to the travel ban list, as Saipov reportedly pledged his allegiance to ISIS prior to the attack.

NBC News reporter Tom Winter reports a note written by Saipov pledging his allegiance to ISIS was found after the attack.

On Tuesday evening, President Trump announced that he ordered the Department of Homeland Security to strengthen its ‘Extreme Vetting Program.’

“I have just ordered Homeland Security to step up our already Extreme Vetting Program. Being politically correct is fine, but not for this!,” tweeted President Trump.

I have just ordered Homeland Security to step up our already Extreme Vetting Program. Being politically correct is fine, but not for this!

Perhaps the crackdown pertains with Uzbekistan?