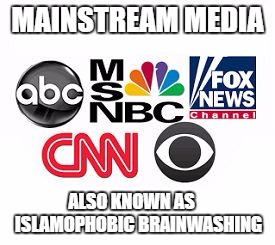 Media outlets and journalists are already warning of an “anti-Muslim backlash” and “Islamophobia” after an ISIS-inspired terrorist killed eight in New York.

Sayfullo Saipov killed eight people with a truck in Manhattan on Tuesday while yelling “Allahu Akbar,” and police found a note inside the truck that expressed ties to ISIS.

However, journalists are warning that the attack could lead to increased Islamophobia because people will question the terrorist’s religious motives and possibly call for stricter immigration restrictions.

MSNBC anchor Stephanie Ruhle tweeted that Muslims “should not fear retaliation…just as my white American Dad didn’t after the brutal Las Vegas massacre,” seemingly forgetting that investigators still have not determined a motive in the Las Vegas shooting.

Splinter News published a video furthering the narrative that Muslims have to be afraid and feel “dread” after a radical Islamic terrorist kills people in an attack. Splinter writes, “As we mourn those lost, Muslim Americans brace for backlash.”

8 people died in #Manhattan in what officials are calling a terrorist attack.

As we mourn those lost, Muslim Americans brace for backlash: pic.twitter.com/gtsHsjB0NL

NBC News sent a similarly-worded tweet warning of a “backlash” against Muslims.

Jessica Valenti, a feminist author and contributor to The Guardian US, indicated that she is “heartsick” for the “uptick in Islamophobia” sure to come after the attack in Manhattan.

Heartsick for the families of those who were hurt and killed tonight, and over the uptick in Islamophobia sure to come tomorrow.

The warning of Islamophobia and urge not to discriminate against Muslim Americans came from outside of the media as well.

Today is the start of Islamophobia Awareness Month. Be angry about terror, but never abuse normal people who’ve done nothing to deserve it.

It begins. CNN reports murderer said "Allahu Akbar." Queue the Islamophobia. Many Muslims will now have to answer to Manhattan. Unfortunate.