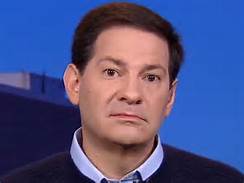 “I’ll speak for both Joe and myself here—our hearts break for Mark and his family, because he is our friend. But we fully support NBC’s decision here,” she said, referring to the network’s decision to get rid of Halperin. “We want to know more about these disturbing allegations. We want to hear the stories. We need to know what happened. And we are not going to avoid the story just because he’s our friend. We’re going to cover it, and we’re going to pray for everybody involved.”

Referencing “more disturbing reports regarding Mark Halperin’s treatment of younger female co-workers” that have come to light “over the the past 24 hours,” Brzezinski said there may be a “possible pattern of unacceptable conduct.”

“Mark and Karen have been part of Morning Joe’s extended family for years. They’re our friends. And we believe it’s important to stand with our friends, through even the most difficult of times,” she said. “But it’s even more important to demand the truth even when the facts appear to be extremely painful.”

Though she said she has “spoken to and heard from some of these women” and claimed that she feels “their pain” and understands “the difficult position they were in” because she has “been through enough in this business to know what” she hears, Brzezinski insisted that “nothing has been proven or adjudicated here.”

Halperin’s heinous behavior was reportedly an open secret throughout the industry, leading to questions about whether the Morning Joe co-hosts palled around with him even though they new about his predatory behavior. Left-wing anchor Keith Olbermann suggested that it is laughable that Scarborough did not know about Halperin’s “Sleazebag” reputation.

Scarborough has not commented about Halperin, allowing Brzezinski to speak on his behalf.

The Daily Beast reported on Thursday that “numerous sources at NBC, MSNBC, ABC, and Bloomberg” said that the “private allegations of Halperin’s sexual misconduct were an open secret, particularly in New York City and D.C. political media, for many years.”

Vox reporter Liz Plank said on Thursday that Halperin “was the Harvey Weinstein of media.”

“I’m receiving texts today from women in media who are older, younger, new to media. And a very sort-of-junior reporter told me that one of the first things she was told when she started working on the campaign trail was she was warned about Mark Halperin,” Plank said during a CNN appearance. “So, in a way, he was the Harvey Weinstein of media.”

This was an open secret when I was at @ABC for years- brave of these women to speak up. https://t.co/xQgu2xZMUk

You mean “Covered UP.” I never even met Halperin and even I knew the guy brought the rep of Sleazebag with him from ABC. @joenbc didn’t? LOL https://t.co/i8aj0pdJSE