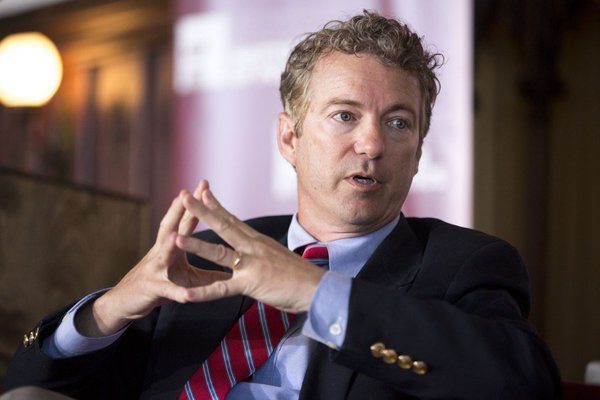 Earlier in the week, it looked like the Senate healthcare bill — the Better Care Reconciliation Act (BCRA) — was dead and buried.  That very well may still end up being the case, but perhaps rumors of the proposal’s death have been premature.  According to multiple reports, Republican Senators are still in talks to revive the effort, with some signs of incremental progress starting to emerge.  It sounds like developments are still quite some distance away from a House-style bounce-back, but it still sounds like marginal progress.  First, Rand Paul — who’s faced some heat for his at-times contradictory intransigence — appears willing to throw an important procedural bone to his fellow Kentuckian, Mitch McConnell:

🚨News: Rand Paul says he will support a motion to proceed on health care if he is guaranteed a vote on clean repeal upfront. 🚨

Additional details from The Hill:

The Kentucky Republican said on Thursday that he would support the motion to proceed to the House-passed healthcare bill, which is being used as a vehicle for any action, if he could get a deal on amendments. “If they want my vote, they have to at least agree that we’re going to at least have a vote on clean repeal,” Paul told reporters.  The Kentucky Republican floated that Senate leadership should guarantee votes on some of the caucus’s most prominent healthcare proposals — including repeal-only, repeal-and-replace and a bill created by Sens. Bill Cassidy (R-La.) and Susan Collins (R-Maine) — as a way to get him on board. “I think they’re pretty equal in support. Let’s do a random selection. Let’s have three or four of them, put them in random order, the first day, equal billing. I think that’s a compromise. I’m willing to get on the bill,” he said. Senators are expected to hold a procedural vote on Tuesday.

This strikes me as constructive and fair.  Rather than debating nothing, upper chamber Republicans would consider a number of options, including (presumably) a finalized version of the still-evolving BCRA.  Speaking of which, a new CBO score of the bill didn’t result in too many changes — people are again seizing on it to perpetuate the “22 million lose coverage” myth — with one potentially-significant exception.  McConnell has opted to leave a few more Obamacare taxes in place, freeing up more on-paper dollars to address concerns raised by moderate holdouts:

This appears to confirm whispers about GOP leaders’ next move, first reported earlier in the week:

In a bold move to revive their healthcare bill, Senate Republican leaders are getting ready to propose giving $200 billion in assistance to states that expanded Medicaid, according to a person familiar with internal Senate negotiations. The huge sum would be funded by leaving in place ObamaCare’s net investment income tax and its Medicare surtax on wealthy earners, according to the source briefed on the proposal…The source said the aid would be targeted primarily at Medicaid expansion states, adding it would be distributed on “the back end” of the bill’s timeline, when the legislation would phase out the generous federal contribution for expanded Medicaid enrollment — a central pillar of ObamaCare. The goal is winning the support of wavering moderate Republicans who will make or break the legislation…

On one hand, this move could pay double dividends.  It would help assuage centrists who are worried about the (needed and fair) Medicaid reforms, while also eliminating two “tax cuts” (really reversals of tax increases) that Democrats have argued are sweetheart deals for the rich.   On the other hand, with Paul still almost certainly in the “no” camp on final passage, joining at least Susan Collins and Mike Lee, McConnell is stallion grave danger of falling short of the requisite 50 votes — a challenge made more difficult by John McCain’s indefinite absence.  Someone like Mike Lee’s vote is likely essential for the legislation to have any chance of passage.  How does greasing moderates’ skids with more tax dollars help attract skeptical conservatives?  Don’t they need policy sweeteners, too?  Ed Morrissey addressed this ‘see-saw’ problem yesterday:

That may appeal to the moderates, but the conservatives won’t like it at all. They want the savings to go toward tax reform, which the savings from necessary Medicaid reforms will help buffer. While there is enough deficit improvement from these reforms to allow for horse-trading at this level, it’s about all McConnell can afford to give up while still qualifying the BCRA under reconciliation, and it could complicate the tax-reform effort that is next on the Republican agenda. It’s tough to imagine Mike Lee and Ted Cruz coming along for this buyoff, let alone Rand Paul — and if they don’t, then the whole effort is pointless.

Cruz seems willing to play ball so long as his amendment survives, but Lee broke ranks on this front a few nights ago.  Winning him over is just as crucial as bringing Capito or Heller into the fold.  Perhaps if the chips are down and the Texan is satisfied with imperfect compromises, he can convince his Utah ally to hold his nose and pass something that improves upon the failing Obamacare status quo.  Step one is getting onto the bill, which is by no means a foregone conclusion at all, even with Paul’s concession.  With votes supposedly scheduled for next Tuesday, let’s stand by for updates.  I’ll leave you with this brutal takedown of baseless anti-BCRA propaganda offered by a former top Obama healthcare official. Cynical lies or revealing ignorance? Take your pick:

Does @ASlavitt know ANYTHING about Medicaid…? @FDRLST https://t.co/vIawReqFVp