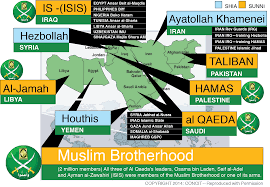 The Muslim Brotherhood has named America an “enemy state”. Apparently we were friends before. And terrorism is just what they do to their friends.

Also, “The Muslim Brotherhood is launching today a solidarity call with all Palestinian factions and Islamic movements to ignite an uprising throughout the Islamic world against the Zionist occupation and the American administration.”

But how will it do that without backing from Obama? And with Qatar being blockaded?

“The Muslim Brotherhood stresses that… . Jerusalem is an Islamic and Arab land, for which we make blood, freedom and life, and we fight every aggressor and every supporter of aggression”

Great, now let’s take them at their word.

Lawmakers behind a House bill aimed at designating the Muslim Brotherhood a terrorist organization have prepared a draft letter calling on Secretary of State Rex Tillerson to designate the group as a Foreign Terrorist Organization. The draft letter was signed by some two dozen congressmen and was shown to Fox News.

(By Daniel Greenfield and reported by Front Page) http://www.frontpagemag.com/point/268649/muslim-brotherhood-declares-war-america-daniel-greenfield  (December 6, 2017)