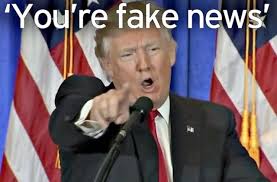 As President Donald Trump prepares to hand out the “Fake News Awards” today to his journalist critics, a new study and a separate survey shed light on the negative news coverage of the Trump presidency and how the public defines “fake news.”

“We’ll keep you posted on details around that potential event and what that would look like,” @PressSec says.

On Tuesday, White House press secretary Sarah Huckabee Sanders referred to the awards as a “potential event,” implying it might not happen. Earlier Tuesday, two former Obama administration lawyers said such an awards show would amount to an ethics violation.

During Trump’s first year in office, 90 percent of TV news coverage of the president on ABC, NBC, and CBS was negative, according to the Media Research Center, a conservative media watchdog.

Meanwhile, Republicans are more likely to define perceived biased coverage as fake news compared to Democrats, who are more likely to only view knowingly falsely reported stories as fake, according to a survey on media trust by the Knight Foundation, a journalism nonprofit, and Gallup.

The White House has been mum about the details, regarding questions about categories and who would judge the award “winners.”

“We’ll keep you posted on details around that potential event and what that would look like,” Sanders said Tuesday during the press briefing.

If Trump’s goal was to stir attention, he succeeded.

Norman Eisen, a former special counsel for ethics for President Barack Obama’s White House, and Walter Shaub, the former head of the Office of Government Ethics during the Obama administration, both said the awards could amount to an ethics violation.

If the awards do proceed, there is apparently plenty of material, based on the Media Research Center study of network coverage in 2017.

The three big networks devoted about 100 hours of airtime covering Trump, a little more than one-third of all evening news airtime. Of the 5,883 “evaluative statements” made about Trump on those networks, 90 percent were negative, according to the Media Research Center.

Further, the Russia investigation, which the president has consistently called a fake story, was the No. 1 issue of coverage, consisting of 1 in 5 minutes of all Trump coverage, or 20 hours. That compared to 475 minutes on repealing and replacing Obamacare; 364 minutes on North Korea; 258 minutes on border security; 251 minutes on the extreme vetting policy; and 222 minutes on tax reform.

Trump’s escalating feud with the news media has been a trademark of his presidency. When a group of House Democrats introduced articles of impeachment against Trump in November, one accused the president of “undermining freedom of the press” by calling media organizations “fake news,” for “circulating a video of himself violently wrestling a man covered by the CNN logo,” and for disparaging remarks about TV news hosts Megyn Kelly and Mika Brzezinski.