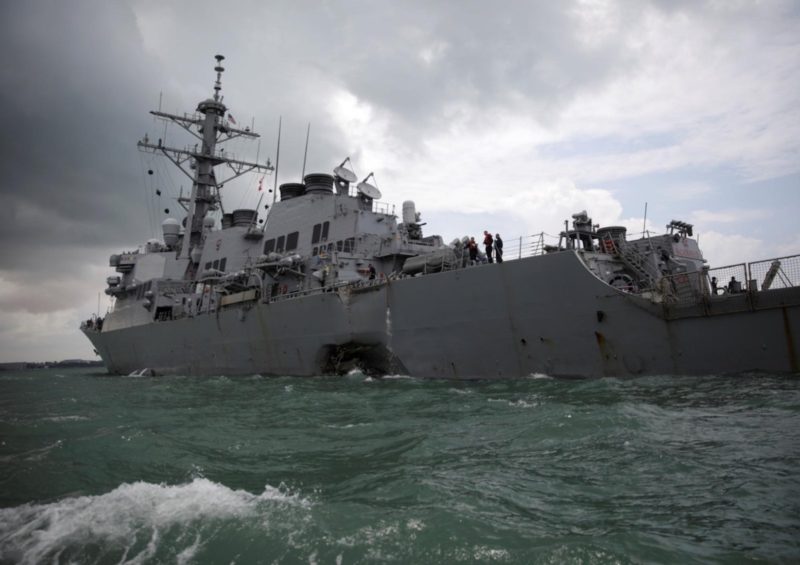 U.S. Navy officials are not ruling out the possibility that the collision between the USS John S McCain and a Liberian oil tanker was intentional, according to Chief of Naval Operations Adm. John Richardson.On Monday, the USS John S McCain collided with the 30,000-ton, 600-foot Liberian Alnic MC oil tanker at 6:24 a.m. Japan Standard Time near Singapore. The collision tore a 600-foot hole in the side of the warship. The collision injured at least five sailors, and 10 sailors were missing.

Special: Get your state of the art Surefire flashlight today
U.S. Navy Adm. Scott Swift said Tuesday that “some remains” have been found within the flooded compartments of the warship, CNN reported, but search efforts are continuing.

According to the Washington Times, the Pentagon initiated a two-day pause of all Naval operations across the globe. Richardson called the pause an “operational pause in the near term” in order to review “the [operational] fundamentals at the unit and team level.”

The Washington Post reported that the Navy has ordered a fleet-wide “fundamentals review” on basic protocols and maneuvers necessary for Naval operations. Adm. Phillip Davidson, head of the Navy’s Fleet Forces Command, is reportedly looking into how junior and senior warfare officers are trained to see where improvements can be made.

Simultaneously, Richardson said that the Navy has not ruled out the idea that the collision was intentional. However, the Navy is currently treating this as an accident because no proof of malicious intent has been unearthed.

“Right now, there is no indication of that, yet,” Richardson said. “But we are taking a look at all of that.”

In June, the USS Fitzgerald collided with a container ship off the coast of Japan. The Navy also investigated the incident for foul play, but found none. Vice Adm. Joseph Aucoin relieved the commanding crew of the Fitzgerald for “loss of confidence,” blaming the collision on poor seamanship and lack of watchstander preparedness.

The possibility of a cyberattack
Richardson addressed the idea of an intentional collision in a tweet on Monday. In the tweet, he pointedly mentioned the “possibility of cyber intrusion or sabotage.”

The idea that a foreign entity or malicious party attempting to hack U.S. warships wouldn’t be outside the realm of possibility, especially given the location and purpose of the John S McCain.

The U.S. uses the warship for Freedom of Navigation Operations, or FONOP, meant to challenge China’s encroachment on trade routes in the South China Sea. Brunei, Malaysia, the Philippines, Taiwan, and Vietnam all utilize these trade routes. Together, some $5 trillion in ship-borne trade passes through these routes every year.

However, Beijing believes the trade route belongs to China. The U.S. government believes China has been crafting man-made islands and military bases that extend further and further into the South China Sea, but China has denied this.

The John S McCain was on its way back from the Navy’s third FONOP. The warship intentionally sailed close to China’s Spratly islands, in a challenge to China’s ownership of the waters. The oil tanker struck the warship as it neared Singapore, tearing a hole in the ship, and temporarily put the vessel out of commission.

The collision of the two massive ships raised questions about how a Naval warship in contested waters would have a crew not alert enough to see a massive oil tanker headed its way was one of the questions for some experts.

According to Fox News, Jeff Stutzman, an ex-information warfare specialist in the Navy who works at a cyberthreat intelligence company, believes “there’s something more than just human error going on.”

“When you are going through the Strait of Malacca, you can’t tell me that a Navy destroyer doesn’t have a full navigation team going with full lookouts on every wing and extra people on radar,” Stutzman said.

“Both USS McCain and USS Fitzgerald were part of the 7th Fleet, there is a relationship between these two events and there may be a connection,” Glick said.

According to news.com.au, Glick worked with Israeli intelligence’s cyber-warfare unit for seven years. During that time he said that he saw evidence of technology used to interfere with a ship’s GPS that, at one point, sent at least 20 ships off course in the Black Sea near Russia.

Experts said that this type of cyberattack could potentially be isolated to one ship, and Glick believes China and Russia have this technology.

“China has capabilities, maybe they are trying things, it is possible,” Glick said.

(First reported by The Blaze)http://www.theblaze.com/news/2017/08/22/navy-not-ruling-out-us-warship-collision-with-oil-tanker-as-possible-cyberattack/   (August 22, 2017)