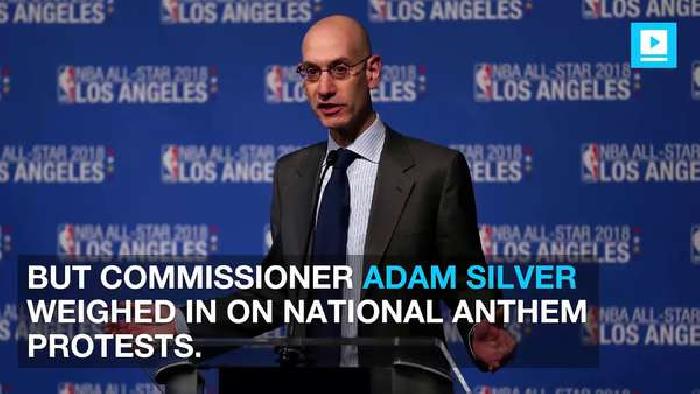 NBA Commissioner Reminds Players to Stand During Anthem ‘Its a Rule’

The rule on the books requires players to “line up in a dignified posture along the sidelines or on the foul line”.

“It’s been a rule as long as I’ve been involved with the league, and my expectation is that our players will continue to stand for the anthem,” Silver said.

When Silver was asked if players would be hit with a penalty if they violated the rule, he responded, “All I can say is if that were to happen, we’ll deal with it when it happens.”

Although the NFL has dominated the news cycle with an explosion of protests and a very public fight with President Trump after he called them ‘sons of bitches’ for kneeling, some NBA players have jumped in the fight as well.

Last Saturday President Trump revoked his invitation to NBA Champion Stephen Curry to visit the White House after the NBA star expressed his hesitation to join his team.

Going to the White House is considered a great honor for a championship team.Stephen Curry is hesitating,therefore invitation is withdrawn!

Perhaps the NBA wants to avoid a fallout from fans after watching such a huge backlash from angry Americans boycotting the NFL.