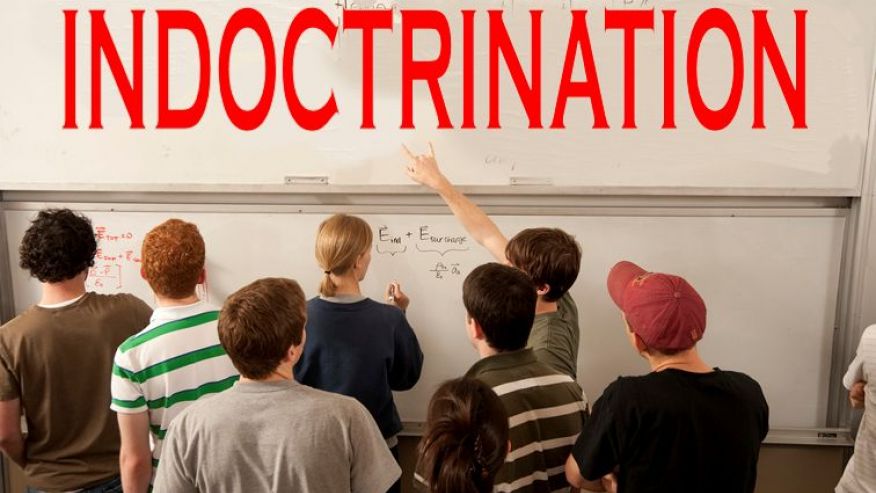 In his newly published book, The Corrupt Classroom, Lance Izumi of the Pacific Research Institute illustrates how the public school classroom has become increasingly politicized, with liberal teachers indoctrinating students with an anti-Trump and leftist agenda.

Izumi makes the case that while many school choice supporters rely on academic school performance data to show that public schools are failing, there are many other equally important reasons to support it.

“Many parents, for example, are rightly concerned about the growing politicization of the classroom,” Izumi explains. “Far from being mere anecdotal incidents—and there are lot of those—political bias is becoming systemic in public school systems and has turned many public schools into indoctrination centers for progressive ideologies and causes.”

For example, the United Educators of San Francisco, a teachers’ union, created an anti-Trump lesson plan and distributed it to 6,000 members. In the lesson plan, Trump was labeled a “racist and sexist man” and included only reports from left-wing sources such as Mother Jones. Teachers were instructed to tell students, “we will keep fighting” and “we must and will fight for justice against an unjust system and an unjust people.”

Izumi also cites the example of Yvette Felarca, a teacher at a middle school in Berkeley, Calif., who is the leader of By Any Means Necessary, which was described as a militant, radical group that uses violence to spread its message.

“Felarca reportedly shoved a man to the ground at a demonstration in Sacramento,” Izumi explains. “The brawl resulted in seven people being stabbed. Felarca told the Mercury News that the First Amendment should not protect speech with which she disagrees and that she labels ‘hate speech.'”

Izumi says that following these actions, parents were outraged and complained that her violent message should not have a place in the classroom. The book cites many more examples of how students were subjected to indoctrination in the classroom, including some who were asked to complete assignments with an anti-Trump bent or teachers who were very open about their liberal beliefs—including one who yelled “Die!” in front of students at a photo of President Trump.

Izumi says that parents should also be aware of school-related crime and the safety of their child when deciding what school to choose.

“There have been many instances of appalling crimes on school campuses, ranging from peer-to-peer bullying to classroom sexual assaults that make every parent shudder with fear for the safety of their own children,” Izumi writes.

For example, Lanny, a 9-year-old in Alabama, was attacked by a bully at her school and suffered a concussion, a bruised face, and two black eyes. Instead of accurately reporting the incident to the child’s mother, school officials said Lanny had fallen on accident. Lanny’s mother decided to homeschool her daughter following the incident because she doesn’t feel the school did enough to prevent bullying and did not even punish the bully.

“When I asked the principal what was being done about the bully, he said she would be suspended for two days,” Lanny’s mother said. “Then I found out they didn’t even do anything to her.”

In addition to safety, Izumi says there are religious biases that have been present in the classroom that parents should be concerned about.

“Just as parents do not like teachers and school officials to favor one political candidate over another, so parents oppose the promotion of one religious faith over another,” Izumi says. “Yet, in public schools across America, teaching, curricula, and policies seem intended to disfavor Christianity and favor other religious faiths.”

There have also been instances of sexualization in the classroom. Izumi explains that a school in Fremont, Calif., distributed a textbook for ninth-graders that taught teenagers about vibrators, oral sex, bondage, female sterilization procedures, and sexual techniques that went beyond the activities that cause birth.

“Not surprisingly, the textbook ignited outrage among parents in the school district, despite the socially liberal reputation of the San Francisco Bay Area,” Izumi explains. “Hundreds of people signed a petition to urge the Fremont school board to rescind its decision to use the textbook in ninth-grade health classes.”

Izumi says that all of these reasons are cause for parents to be concerned about what school their child is attending.

“A public school might have decent test scores, but if parents feel their children are being politically indoctrinated, are at risk of being victimized by other students or teachers, are being shortchanged because of mismanagement by school officials, or are having their basic value system overturned, then parents and their children should have the right and the tools to exit the public school system for educational alternatives that better meet their needs and preferences,” Izumi said.