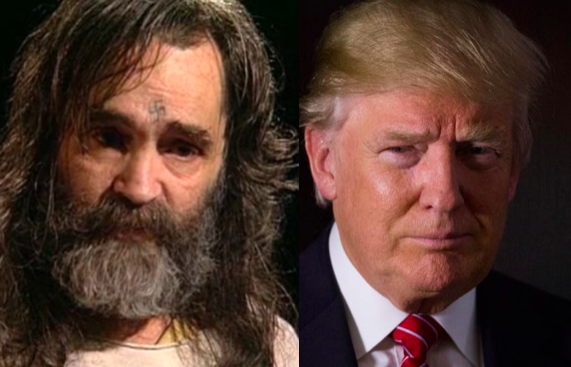 Two Things happened yesterday: serial killer Charles Manson died and Newsweek complained that calling them “fake news” destroys democracy. Today, Newsweek published a piece comparing President Trump with the deceased brutal murderer in an effort to show what real news is all about. Thank goodness they were able to preserve our democracy and their stellar journalistic reputation with one crazy-ass article.

Yesterday Newsweek sent out this dire warning: FALSE CHARGES OF ‘FAKE NEWS’ ARE HARMING OUR FREE PRESS. And yes it was in ALL CAPS so you know how serious they view the threat. It even came with this:

Such attacks pose an urgent and systemic danger to our democracy, as they encourage corruption and abuse of power by undermining credible media reporting on such behavior.

Unfortunately, these attacks on quality investigative reporting represent part of a broader trend of conservative politicians across the country adopting the tactic of condemning media as “fake news” whenever there are stories unfavorable to them.

So it is Newsweek’s position that conservative politicians are destroying democracy by calling the liberal media “fake news.” In order to drive their point across, Newsweek published this “real news” today about a Republican politician: HOW MURDERER CHARLES MANSON AND DONALD TRUMP USED LANGUAGE TO GAIN FOLLOWERS, again in ALL CAPS.

Really? Real news is comparing the President of the United States to a convicted killer responsible for the brutal murders of 7 innocent people? Apparently so.

According to psychoanalyst Mark Smaller, past president of the American Psychoanalytic Association, part of Manson’s power lay in the type of language he used. Notably, Manson was able to speak in a way that engaged those who felt marginalized or alienated.

“A charismatic leader knows how to speak to people in a way that will emotionally engage those people. Our current president speaks in an emotional or affective way to large numbers of people in our country who feel a kind of alienation or disconnection from the government. They feel very responded to and become his political base,” said Smaller.

According to the psychoanalyst, cult followers like those in the Manson family are so seduced by feelings of acceptance and understanding that they accept their leaders’ ideologies regardless of how destructive or dangerous they may be.

The greatest part about this “real” piece of news is this:

This unemployed headshrinker has no idea what Manson said to his followers, but is confident that he and president Trump are the same when it comes to manipulating people into following them. That is one outstanding piece of science and God bless Newsweek for bringing us this important breakthrough.

There’s probably a pretty good reason why this ”expert” is no longer a working professional, don’t ya think? Also, it’s very clear that nobody at Newsweek has any idea what the following words mean: “fake,” “real,” “democracy,” “news,” and oddly enough “week.”

In case you were worried that our democracy was in jeopardy, or that Charles Manson’s death was going to go by without someone linking him to President Trump, Newsweek has your back. I think I now understand why Sydney Harmon was able to buy Newsweek for a dollar in 2010. It’s got to be worth 2 or 3 bucks by now.