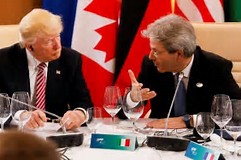 Bologna (Italy) (AFP) – The United States’ partners in the G7 club of wealthy democracies vowed Sunday to pursue efforts to curb climate change despite a rift caused by the United States’ withdrawal from the Paris accord.

“G7 countries have crucial roles and responsibilities to our own public opinion, to developing countries and to the planet,” Italy’s Environment Minister Gian Luca Galletti said at the start of a two-day meeting of G7 environmental chiefs. “The international community awaits our message.”

Scott Pruitt, a friend of the oil industry who is sceptical about man-made climate change and was Trump’s controversial choice to head the US Environmental Protection Agency, attended the meeting but was due to fly home after the first day.

With Germany’s environment minister, Barbara Hendricks, also departing early and France’s Nicolas Hulot not arriving until Monday because of legislative elections, there appeared little prospect of substantial dialogue on an issue which has caused significant tensions between Donald Trump’s administration and key US allies.

Adding to the frustration of the Italian hosts, Britain was represented by a junior minister as efforts to form a new government in London continued.

Patricia Espinosa, the UN official in charge of implementing the Paris accord, stressed that Trump’s pullout would not make any difference in the short-term.

“We’ve all registered with regret the US decision but at the same time the US remains a party to the agreement because it foresees a three year period before any party can withdraw.

“So for us it is really clear that what we need to do is to go forward with implementing the accord and helping countries translate their national programme into their development policies so we can get to 2018 and have a first assessment of where we stand,” she said.

Italy’s large environmentalist movement had planned a demonstration against Trump’s decision for Sunday afternoon in Bologna, an ancient university city and bastion of progressive activism.

“We are expecting a good turnout. A lot of people are very upset about Trump’s decision and it has started a new debate,” Giacomo Cossu, one of the organisers of the demonstration, told AFP.

Trump announced at the start of this month that the US would not abide by the 2015 Paris agreement and would seek to renegotiate terms he denounced as unfairly damaging to the American economy and overly generous to India and China.

Trump said Washington would  not be bound by the targets on reducing emissions of greenhouse gases set down in Paris, and will cut funding for developing countries affected by climate change.

But many analysts say Trump’s rhetoric may make little difference.

Important players in US industry and individual cities and states are already implementing changes aimed at meeting the targets laid down in Paris, where most of the world’s countries agreed to try and cap global temperature rises at 2C above pre-industrial levels.

Germany and California agreed Saturday to work together to keep the Paris accords on track and the most populous US state had its own representative at the Bologna talks.

When G7 leaders met in Sicily last month, they publicly recognised that the US was isolated on the climate issue, with the other six member countries vowing to continue promoting green technology and renewable energy forms.

The G7 is made up Britain, Canada, France, Germany, Italy, Japan and the United States, the world’s seven biggest economies when the club was formed. The discussions in Bologna were also attended by Chile, the Maldives, Ethiopia and Rwanda, four developing countries with a particular interest in combatting climate change.