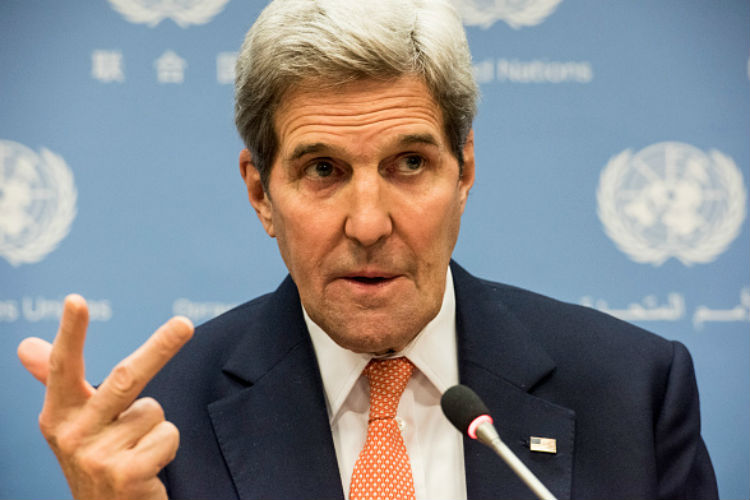 (CNSNews.com) – As President Trump continued an Asia trip dominated by concerns over North Korea, former secretary of state John Kerry told CNN Monday that Trump’s rhetoric has given the Kim Jong-un regime reason to say that it needs a nuclear bomb.

“What the president needs to do is to make sure he’s not feeding into North Korea’s fear of regime change, or of a unilateral attack or otherwise,” Kerry told interviewer Christiane Amanpour.

“And I think the rhetoric to date has, frankly, stepped over the line with respect to the messages that are being sent,” he continued. “It’s given North Korea a reason to say, ‘Hey, we need a bomb, because if we don’t have a bomb, we’re going to, you know, not be able to protect ourselves and they’ll come after us.’”

It went on to carry out four more tests during the Obama administration – three of them while Kerry was at the helm at the State Department, with one taking place just 11 days after he was sworn in.  The seventh test – the last to date – was conducted last September.

In Tokyo on Monday, Trump acknowledged that some have criticized his rhetoric directed at North Korea.

“Some people said that my rhetoric is very strong, but look what’s happened with very weak rhetoric over the last 25 years,” he said during a joint press conference with Japanese Prime Minister Shinzo Abe. “Look where we are right now.”

As secretary of state, Kerry is arguably best remembered for his role in negotiating the 2015 nuclear deal with Iran – an agreement which he continues to defend forcefully as it comes under fire from Trump and others.

Amanpour asked him about the argument that the Obama administration, focused on the Iran talks, should have paid more attention to North Korea – and that Obama’s “strategic patience” approach had led to the current situation.

“That’s not accurate,” Kerry said. “We actually did a lot of things. We sent emissaries, we asked the Chinese to send emissaries.”

Kerry also touted the fact that China – North Korea’s biggest trading partner – had “ratcheted up its sanctions, twice, under our administration.”

(While in office, Kerry at times expressed frustration over Beijing’s evident reluctance to use its leverage with Pyongyang. After North Korea early last year carried out its fourth nuclear test, Kerry said he told his Chinese counterpart that “we cannot continue business as usual.”)

Kerry referred in his CNN interview to the North Koreans’ “fear of regime change,” concerns about U.S. aggression, and “the existential threat that they feel.”

The Trump administration has been assuring Pyongyang for months that it does not harbor such plans.

Even as tensions rose over the summer as the regime test-fired intercontinental ballistic missiles (ICBMs), both Secretary of State Rex Tillerson and Defense Secretary James Mattis reiterated that the U.S. was not pursuing regime change, a speedy reunification of the Korean peninsula, or any pretext to deploy troops north of the 38th parallel dividing the two Koreas.

Those assurances came in early August and again in an op-ed that month.

Kim Jong-un responded three weeks with the regime’s most powerful nuclear test yet.

Trump declared in Tokyo on Monday that “the era of strategic patience is over” – echoing statements made last spring by Tillerson and Vice President Mike Pence, on separate visits to Northeast Asia.