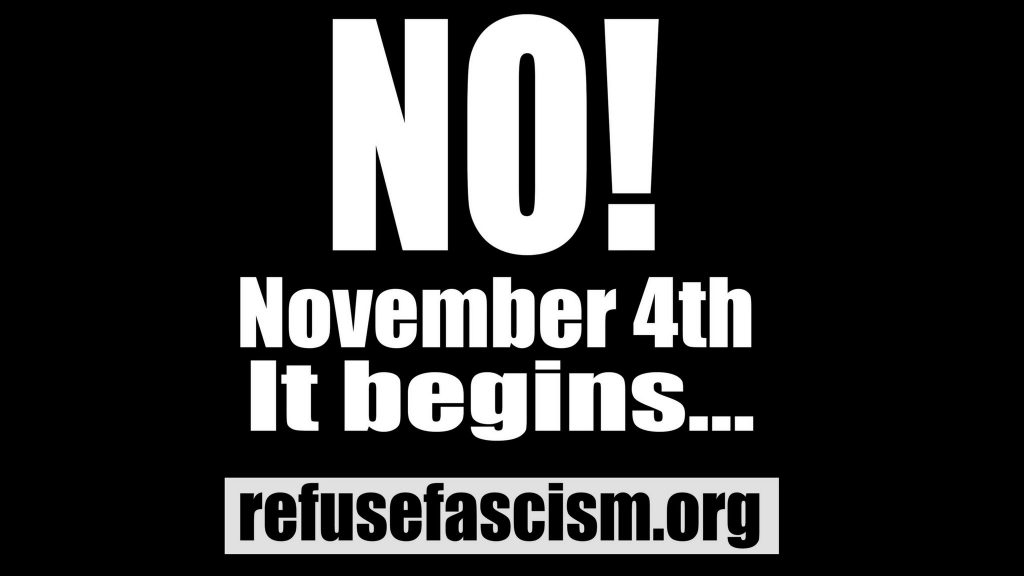 On Nov. 4, the group “Refuse Fascism” will host nationwide rallies in 14 different cities for its mission, which is quite simple: “The Trump/Pence regime must go” — and by any means possible.

As expected, the mainstream media continue to hype the coming protest as a marker for when the Left will raise a united moral front against the Trump presidency. But the truth is far more sinister.

Refuse Fascism positions itself as a big-tent movement from “many different points of view” that is looking out for the best interests of America. But that’s hardly the case. The reality is that it is an extremist outfit that seeks to overthrow the principles that this country was founded upon.

Its namesake is the ultimate irony. Over the past year, Refuse Fascism has shown itself to be a fascist group. The Antifa-linked group has taken pride in shutting down speakers from across the political spectrum, often declaring anyone even a smidgen right of the far-left as a “neo-Nazi” who should not — and cannot — be heard.

While quite transparent about its goals, the organization has taken several measures to hide its operational backings. Its website reveals no details about the people behind the coming Nov. 4 rallies.

However, when soliciting donations, the organization asks contributors to send money to the same office address as “World Can’t Wait.” That New York City-headquartered group is led by Debra Sweet, a self-described “revolutionary communist.”

And Sweet is not the only hardcore communist that is part of the Refuse Fascism rallies. According to Politico, several organizers share her views and were leaders in the Occupy Wall Street movement.

So where do the self-proclaimed revolutionaries at World Can’t Wait get their money from?

They receive their cash from the Alliance for Global Justice (AFGJ), an “anti-capitalist,” “anti-imperialist” outfit that was founded by a group responsible for supporting communist revolutionaries in Nicaragua.

According to NGO Monitor, AFGJ has supported convicted terrorists affiliated with groups such as al-Qaeda, Hamas, and FARC. AFGJ also supports “political prisoners in the USA,” displaying a list on its website that includes notorious cop-killers and jihadi terrorists.

Despite its support for extremist causes, leftist billionaire donors continue to happily write checks for the Alliance for Global Justice. According to the Capital Research Center, the George Soros-funded Open Society Foundations has given six-figure checks to the Marxist outfit.

They’ve also received massive funding from the far-Left Tides Foundation (another group Soros has been extremely generous with in years past).

Somehow, Refuse Fascism retains its tax-exempt status with the IRS. While John Koskinen, the sitting IRS commissioner, made sure to leave out Tea Party groups from consideration, he apparently has no issue giving tax credits to a revolutionary group filled with members who seek the violent overthrow of America.

Don’t let the legacy media fool you. The bottom line is that Refuse Fascism is a front for communist revolutionaries who seek the destruction of our nation.