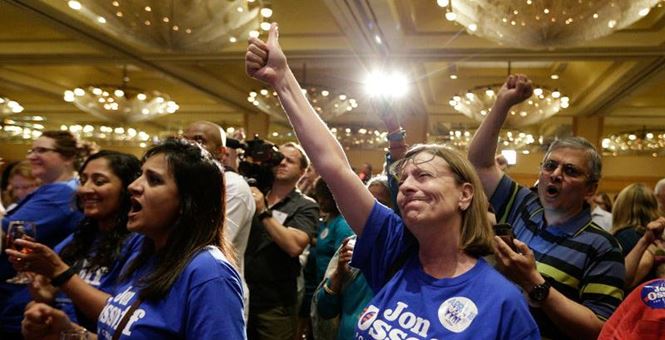 We’ve heard this before back in 2008-09. We don’t need white voters; we have the cities. And we have the Obama coalition that will win elections from here going forward. It’s the age of the Democrat and the permanent Democratic majority. That lasted a year. There are no permanent majorities. The Obama era is blessedly over. And now the Left has to looks at the ruins of their coalition and figure out how to mount a political comeback. They’re in the wilderness. I wouldn’t mind them staying there for an eternity, but alas—you can’t get what you want. Can the Left make a comeback without white working class voters? Well, Steve Phillips, a senior fellow at the left wing Center for American Progress and found of Democracy in Color thinks so. Democracy in Color is the group that pretty much said that reaching out to white working class voters is a mistake.

The Democratic Party’s fixation on pursuing those who voted for Mr. Trump is a fool’s errand because it’s trying to fix the wrong problem. Although some Democratic voters (in particular, white working-class voters in Rust Belt states) probably did swing to the Republicans, the bigger problem was the large number of what I call “Obama-Johnstein” voters — people who supported Mr. Obama in 2012 but then voted for Gary Johnson, the Libertarian candidate, or Jill Stein, the Green Party candidate, last year (according to the exit polls, 43 percent of them were nonwhite).

In Wisconsin, for example, the Democratic vote total dropped by nearly 235,000, while Mr. Trump got only about the same number of votes as Mr. Romney in 2012. The bigger surge in that state was for Mr. Johnson and Ms. Stein, who together won about 110,000 additional votes than the candidates of their respective parties had received in 2012. And in Michigan, which Mrs. Clinton lost by fewer than 11,000 votes, the Johnson-Stein parties’ total increased by about 202,000 votes over 2012.

Too many Democrats sit out midterm elections (in 2014, drop-off was slightly over 40 percent). Those infrequent but Democratic voters hold the key to the balance of power in America. Democrats need to pick up 24 seats to take control of the House, and there are 28 Republican-held seats in districts Hillary Clinton won or nearly won. If Republican turnout drops by the 36 percent that it did the last time a Republican held the White House, Democrats need to get 951,000 drop-offs to vote again in those 28 districts. Civic engagement experts have found that an effective canvassing and mobilization program costs about $50 per infrequent voter who actually casts a ballot.

By that metric, it would cost $47.6 million to get enough infrequent voters to the polls in the 28 congressional districts that will determine which party holds the House. In the six battleground-state contests for governors, the cost to bring out the necessary number of infrequent voters is $42.1 million.

The country is under conservative assault because Democrats mistakenly sought support from conservative white working-class voters susceptible to racially charged appeals. Replicating that strategy would be another catastrophic blunder.

I don’t know what election Steve was watching, but, uh, the Hillary Clinton campaign never reached out to white working class voters. That’s why she lost them by a three-to-one margin, if it were two-to-one; the election might have ended differently. Barack Obama did well enough with this demographic to prevent a running up of the score in the rural areas. He still lost, but not by the huge margins that helped usher Donald Trump into the White House. The record is clear: Obama reached out and won twice. Clinton said screw them and lost. This also speaks to the problem about Obama and the Democrats: they built their whole election operations around one man who was term-limited. Republicans played the long game, winning state and local elections, retaking Congress, and having a talent pool that was younger, viable, and charismatic. The irony is that while Democrats won nationally with Obama, they’ve have been decimated everywhere else. There are 1,000 fewer Democrats holding elected offices than there were eight years ago. The GOP controls 69/99 state legislatures, two-thirds of the governorships, the White House, and Congress. Democrats have no talent pool—all the heavyweights are, or are about to be, customers at the Scooter Store. Sen. Bernie Sanders (I-VT) and former Vice President Joe Biden are two candidates who could probably beat Trump in 2020. The problem for Democrats rests with do they really want to run again, as both men will be approaching 80.

Second, it’s rather presumptuous to think that if Jill Stein or Gary Johnson hadn’t run, Clinton would be president. Third, according to Bill Weld, Johnson’s running mate, their internal polling found that if the Johnson/Weld ticket hadn’t run a candidate last year, 75 percent of their voters would have voted for Trump. There was zero appetite for their voters to break for Clinton. So, the assumption there is flawed. Also, this shows that it’s quite possible that Trump would have also won the popular vote. Larry Sabato of the University of Virginia’s Center for Politics estimated that between 7-9 million voters who cast their ballots for Obama in 2012, voted for Trump in 2016. A lot of these folks are white working class voters. Even The New York Times said that it was white working class voters who helped Trump clinched sweet victory over Clinton. These voters are not die-hard Republicans. They’ll switch if the GOP doesn’t deliver on jobs, trade, or botch things too much on health care. Trump’s economic message resonated; Clinton’s did not because she didn’t have one. Hence, why Democrats are focusing on jobs creation, infrastructure, and minimum wage initiatives in the hopes of wooing this segment again. After all, they used to form the backbone of the Democratic Party.

Yes, energizing nonwhite voters was key to Obama’s victory. The problem was that the Left thought that any Democrat was garnering the same margins. That didn’t happen. Moreover, Clinton’s loss showed how critical white working class voters in red America were to Obama’s victory, which was achieved simply by him showing up and talking to them. The problem here is that he didn’t deliver. Nonwhite voters are also used to government letting them down, they have zero time to join the financially better off and overwhelmingly white progressive resist legions that infest the cities, and they’re just not enthused to hit the street to voice how much they don’t like Trump, even if they’re staunchly opposed to his agenda. In Milwaukee, yes, Democrats could’ve done better with turning out the vote, but Hillary Clinton did not excite nonwhite voters. They sat it out. The candidate sucked. That’s the first problem. Recognizing that Hillary Clinton was just God-awful.

I mean, how can you not see a 7-9 million vote swing and think they’re not the reason why we lost, it was because our people went third party? Are you kidding me? If anything, people would just sit out the election. This is classic not being able to see the forest through the trees. White working class voters and winning in districts that are red leaning are key to the Left in the 2018 midterms. Democrat Jon Ossoff didn’t lose because he channeled a moderate agenda, he lost because GOP turnout was unusually high, thanks partially to Nancy Pelosi, and the fact that Georgia’s sixth congressional district is, well, a Republican one. Democratic turnout in that race was the highest in ten years and they couldn’t win. That should be a huge red flag for Democrats trying to flip red districts; it may not be enough to win. Also, Democrats can go on and on about these 24 seats where voters split for Hillary and a Republican representative, Democrats have a dozen or so congressional seats where Trump won. Also, Third Way, a left-leaning think tank, delivered another blow when they said even if Democrats were able to turnout every 2016 Clinton voter who split tickets for a Republican member of Congress for the 2018 midterms and had them flip their vote, it wouldn’t be enough to retake the House.

The Democrats have huge issues right now, least of all animating their nonwhite coalition that is cloistered in the cities. They’re not enough to win nationally. The Democrats’ Better Deal agenda is not enough either. Speeches and policy proposals aren’t enough. You need candidates and a good political apparatus to sell them to the people you’re trying to win back. And these people, white working class voters, haven’t seen the Democrats in their neck of the woods for a very long time. To show the level of destruction, in Appalachia, which is a working class bastion, Clinton only won 21 of its 490 counties. This is a reconstruction period that is being written off as a racism, sexism, misogyny, or geographic problem. It’s not. Even The New Republic was raising the alarm bells back in 2014 [emphasis mine]

Many Democrats would prefer not to have to face this monumental organization challenge, hoping instead that the existing Obama coalition and demographic changes in America will prove sufficient to elect a president in 2016, hold the Senate, and weaken GOP control over the House of Representatives. But the harsh reality for Democrats is that they cannot achieve all three of these objectives without increasing their support among white working class Americans—and if Democrats keep telling themselves that “the problem is just the South,” that support may decrease instead.

In all, white voters, overall, were historically around 70-75 percent of the electorate. That number will probably be in the same neighborhood in 2020. White working class voters are 44 percent of eligible voters. Slight differentials in this voting bloc can swing an election. We saw that with Trump and the 7-9 million Obama voters he convinced to flip. Democrats, you need white working class voters. Also, working hard, wanting to raise your family on a decent wage, shooting guns, and praying to God are not horrible, vile, and racist ideals. They’re indelibly American, so please keep that in mind, Democrats (though your condescending nature probably won’t allow you). You can win these people back. This post and other that I’ve written are not to help the Left. I’m sure there are plenty of Democrats who understand the problem as well. It’s to also remind the Right that these voters are moveable, and that Republicans should keep that in mind when they’re off the stump.