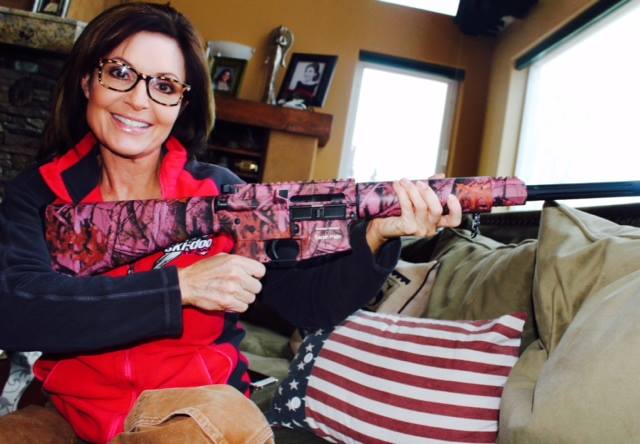 “Have you ever experienced sexual harassment in the workplace as an ambitious woman in public life?” Hunt asked Palin.

No, she said, because she takes full advantage of her Second Amendment right.

Palin said it in jest, but she became more serious when remarking on the very real danger women face around predatory men.

“It really stinks for women in the workplace that for too long, men have thought they can get away with that old-school thinking that it’s okay to belittle and harass women.”

Sen. Franken was accused of forcibly kissing and groping former model and radio host Leeann Tweeden during a 2006 USO tour when he was still a comedian. The accuser described how Franken “stuck his tongue” down her throat and then, when she looked back at photos from the trip, found one of him gesturing his hands toward her breasts. She didn’t report it at the time, she said, because people around her told her it would ruin her career.

Franken regretted the picture, noting it was supposed to be a joke, before issuing a longer apology. His Senate colleagues are calling for an ethics investigation and some of his fellow Democrats are even calling for him to resign.

Hunt, the MSNBC anchor who confronted Palin, it must be noted, is being accused of downplaying Franken’s inappropriate behavior by describing the incident as “mock groping.”