The Intolerant Left strikes again. This time in Little Rock, Arkansas where a Trump-hating parent bullied an elementary school principal into canceling a scheduled Monday appearance by Republican Congressman French Hill because he supports President Donald Trump. The parent threatened to organize a protest with other parents and to also withdraw their children from school during Hill’s visit. 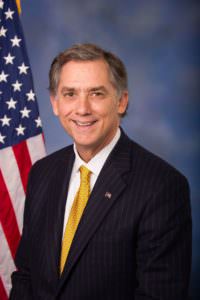 “On Monday, August 28th, Congressman French Hill will be visiting our school to speak to our 5th grade students @ 12:30 p.m. You are welcome to join us for this event on Monday.”

However, one parent thought there was something more to the congressman’s appearance.

“I’m appalled that a supporter of Donald Trump would be allowed to speak to our children, not to mention someone who voted to take away health insurance from many of the families at our school,” Barclay Key replied to the email. “I’m guessing parents don’t want their children used as props by a Republican whose values align with the president.”

Hall responded, “I will assure you all none of this is the case,” while Michael Poore, the Little Rock School District superintendent, wrote, “I am not sure who set up the congressman’s visit, but I think it is appropriate. He is not there to make a political speech.”

But Key persisted, ultimately letting school officials know that he and other parents planned to check their kids out of school Monday and peacefully protest Hill’s visit outside the building.

“I cannot imagine greater hypocrisy than having a Trump supporter speak to our children about character,” he wrote. “His visit will prepare our children for the world we live in only to the extent that this nation is controlled by a wealthy elite whose lives could not be more different than the families who patronize Gibbs.”

“Due to circumstances beyond my control, it is necessary at this time to cancel Congressman Hill’s visit to Gibbs Magnet to discuss this year’s school theme ‘Go Do Great Things’ and character education on Monday, August 28, 2017,” Hall wrote….”

Arkansas Online reported on Hall’s regrets over the cancellation and Hill’s statement on the matter.

…”Following notification that a protest would be staged in front of the school and concerned that the protest would be a disruption to the day for students, I made a decision to cancel the congressman’s visit,” Hall said in the Sunday email that was provided to the newspaper on Monday.

“However, after further consideration, I do not believe canceling Congressman Hill’s visit was the best decision,” Hall wrote. “Gibbs, as an international magnet [school], enjoys a variety of speakers from different backgrounds. From time to time, we have elected officials speak at our schools, and though they may have varying political views, we welcome their non-partisan interaction with our students. If any protest should occur, we would use that as an opportunity to educate our students about the democratic process in action and the right to peacefully demonstrate differing views.”

all also wrote that there is a policy that does not allow elected officials to campaign, give partisan speeches or take photographs with pupils.

“We do not believe that Congressman Hill’s visit would have violated that policy,” Hall wrote.

She said he was invited to speak to the school’s fifth-graders on the school’s 2017 theme of “Go Do Great Things.”

“We have offered our apologies to the congressman and asked him to reschedule,” Hall said, and added that exposing students to diverse opinions and people “helps them become well rounded, informed, thoughtful, and engaged citizens.”

A statement from Hill released Monday evening through his office did not say if the visit will be rescheduled, but it said he treasures his time with students.

“From college to kindergarten, I love interacting with teachers and students,” Hill said in the statement. “I visit schools throughout the year to discuss students’ aspirations and dreams, and the issues of the day, as well as the role education has played in my life, my career as an entrepreneur, and the incredibly important duty to serve that each one of us has in our Constitutional Republic.”… 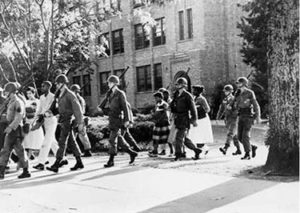 Democrats in Little Rock were infamous for blocking schoolhouse doors back in the day. Apparently some things never change.