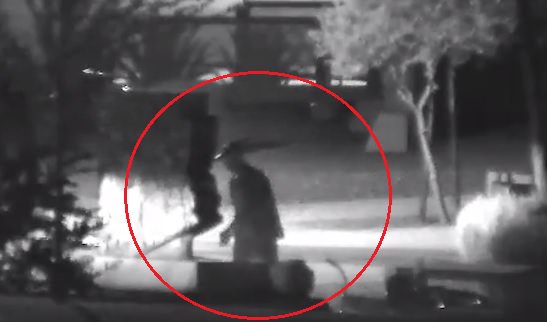 Arizona Department of Public safety is investigating vandalism of a monument in Phoenix.
The vandalism was discovered by reporter Bryan West from the local NBC affiliate.

But now surveillance video shows the NBC news van was at the scene prior to the vandalism and that the head lights of the van were on the vandalism while it was happening.
Bryan West joined the News Channel 12 team after graduation from Northwestern University in 2011.

Bryan West from Channel 12 did an “exclusive” story.

He went to a Confederate memorial at Wesley Bolin Plaza to talk about defaced memorials. When he got there he found the memorial defaced and a guy on a bicycle fleeing the scene. He called police and then reported on it.

But watching the surveillance video from the capitol clearly shows the news van turn on its headlights and shine them at the back of the memorial. Then 1 minute later the suspect rides past the van in front of the headlight carrying 2 cans of spray paint. He goes around to the front of the memorial and spends four and a half minutes defacing it.

He then gets on his bike and rides TOWARD the van and headlights as he exits the scene. One minute later you see the news crew set up for the story.

I obtained further video showing the suspect arriving approximately 11 minutes before the news crew and is riding around the mall in the dark alone.

He isn’t defacing any monuments. Only after the news crew shows up and shines their headlights at the Confederate memorial does he approach and deface it.