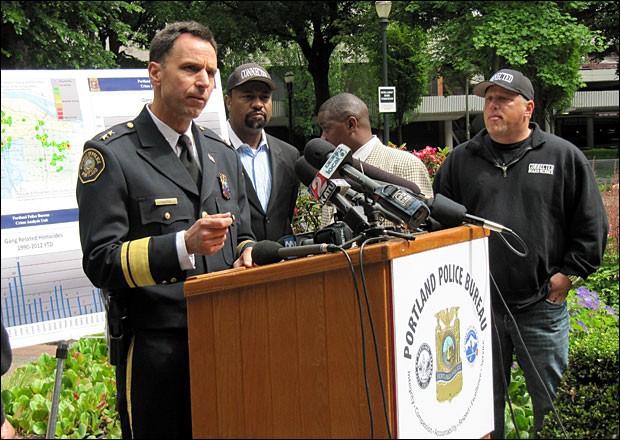 Portland PD will purge the gang member database it has developed over the last 20 years because it “disproportionately affected minorities.”

On October 15th, police officers in Portland, Oregon will no longer have the means to tag known gang members with an official “gang designation.” The Portland Police Department has decided to stop identifying gang members and purge the gang member database it has developed over the last 20 years.According to The Oregonian, before this decision to change policy was made, “Police were able to add someone to the list if the person self-identified as a member of a gang, participated in a gang initiation ritual, committed a gang-related crime or displayed two or more observable signs of gang membership.”

The ability to track gang designations is obviously beneficial to police. Basic common sense tells us there are huge benefits in knowing more about a suspected perpetrator. Known gang affiliations help police officers know where to look for suspects, narrow lists of possible accomplices, and ask the right people the right questions.

Despite these benefits, community organizers in Portland have strongly expressed dissatisfaction with identifying and labeling individuals as “gang” members because they believe this has “disproportionately affected minorities.” The Sentencing Project notes that despite making up just 13% of the population in Oregon, African Americans represent 38% of the state’s penitentiary inmates. Additionally, 21% of Oregon’s prisoners are Hispanic, despite making up only 17% of the population. Known violent gangs like the Bloods, Crips, and MS-13 are not known as racially diverse groups, but rather have specific race-based identities.

Carli Brosseau reported In The Oregonian in late 2016 that, “Of the 359 ‘criminal gang affiliates’ flagged in Portland’s database as of August, 81 percent were part of a racial or ethnic minority.”

Black Male Achievement, a group which lobbied for the change, doesn’t see it that way. C.J. Robbins, BMA’s program coordinator, said, “It takes courage for the bureau to take this step.” Wouldn’t Mr. Robbins’ time be better spent working with youths to keep them out of gangs in the first place? Portland’s Mayor, Ted Wheeler, apparently agreed with removing the designation as well. He said, “This is too long coming. It was the right thing to do.”

Incredibly, some on the left don’t think the Portland P.D.’s politically correct actions go far enough. According to The Oregonian, “Roberta Phillip-Robbins, executive director of MRG Foundation that works for social justice and against racial inequities, asked police what steps they’re taking to get rid of ‘other forms of profiling?'”

The department has countered criticism of the gang designation removal with assurances that they will continue to investigate gang crimes, but without labeling individuals. Captain Mike Krantz, who helped lead the charge, said, “What we’re really investigating is the violent crime.”

This is like saying, after a terrorist attack, that it’s not appropriate to speculate as to whether the perpetrators are associated with ISIS, Al Qaeda, the Taliban or Hamas. It’s pure politically correct stupidity, and just one more example of how the left is destroying the rule of law in this country. Labels aren’t the issue, it’s members of gangs committing violent crimes that Portland needs to tackle; and pretending gang membership is not relevant is pure fantasy.